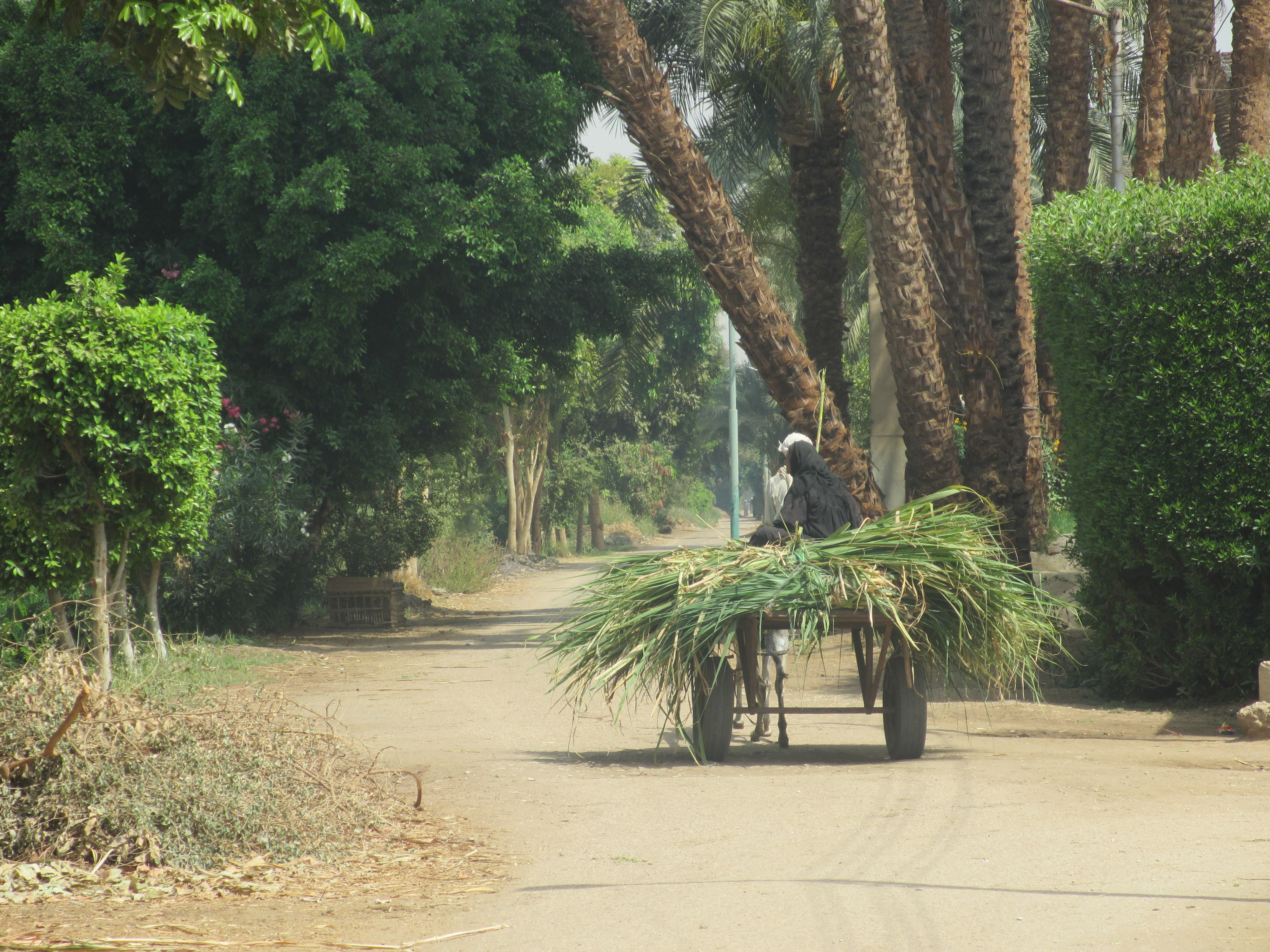 Described as the “world’s greatest outdoor museum”, Luxor is 100 miles or so downriver from Aswan. Although rather bigger, it’s similar in as much as the town is on the east bank of the Nile, but the ancient temples and so forth are to be found on both banks. Wanting to avoid the noise and hassle of the town again, we stayed on the west bank which is very rural, essentially on a banana plantation about a mile south of where the public ferry docks. To save a long walk, rather than use that we took a cab on the east side down to where the hotel sends their own boat to pick you up and drop you directly in the hotel. 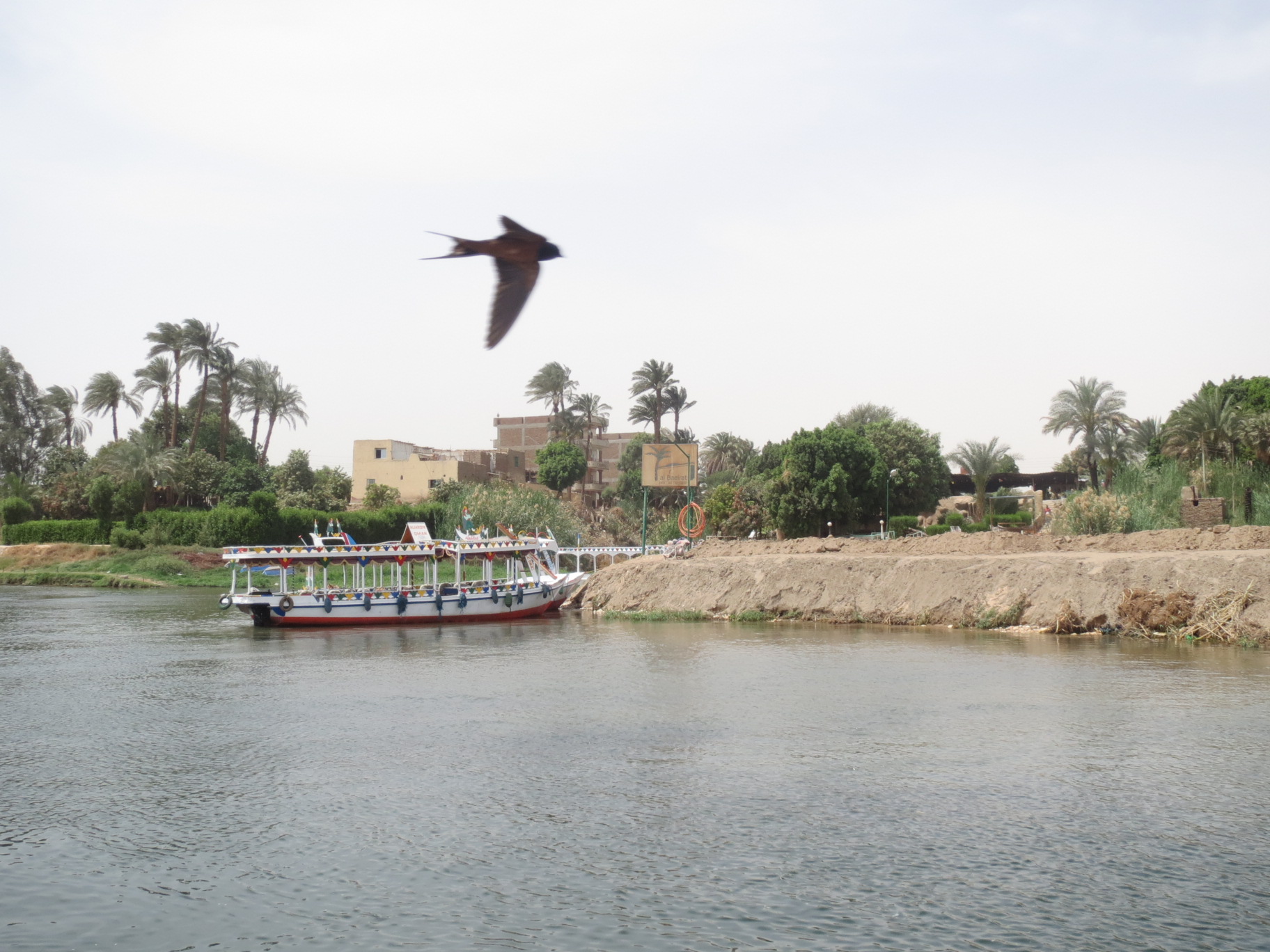 We had our own cabin, very tastefully done and extremely large and private! 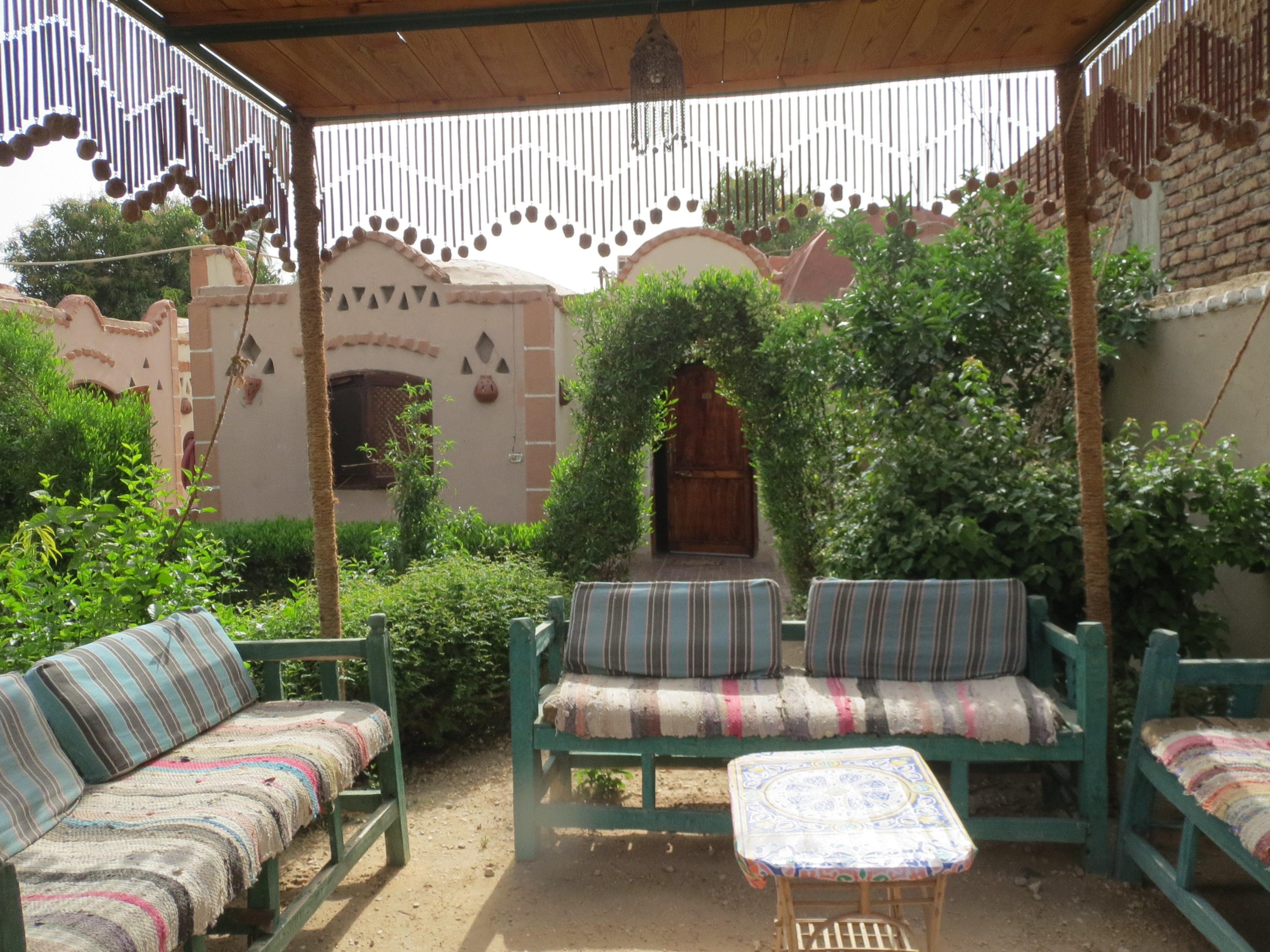 The bathroom is nearly as big as some bedrooms, and continuing an obsession I seem to have of pictures of them, here’s the shower. 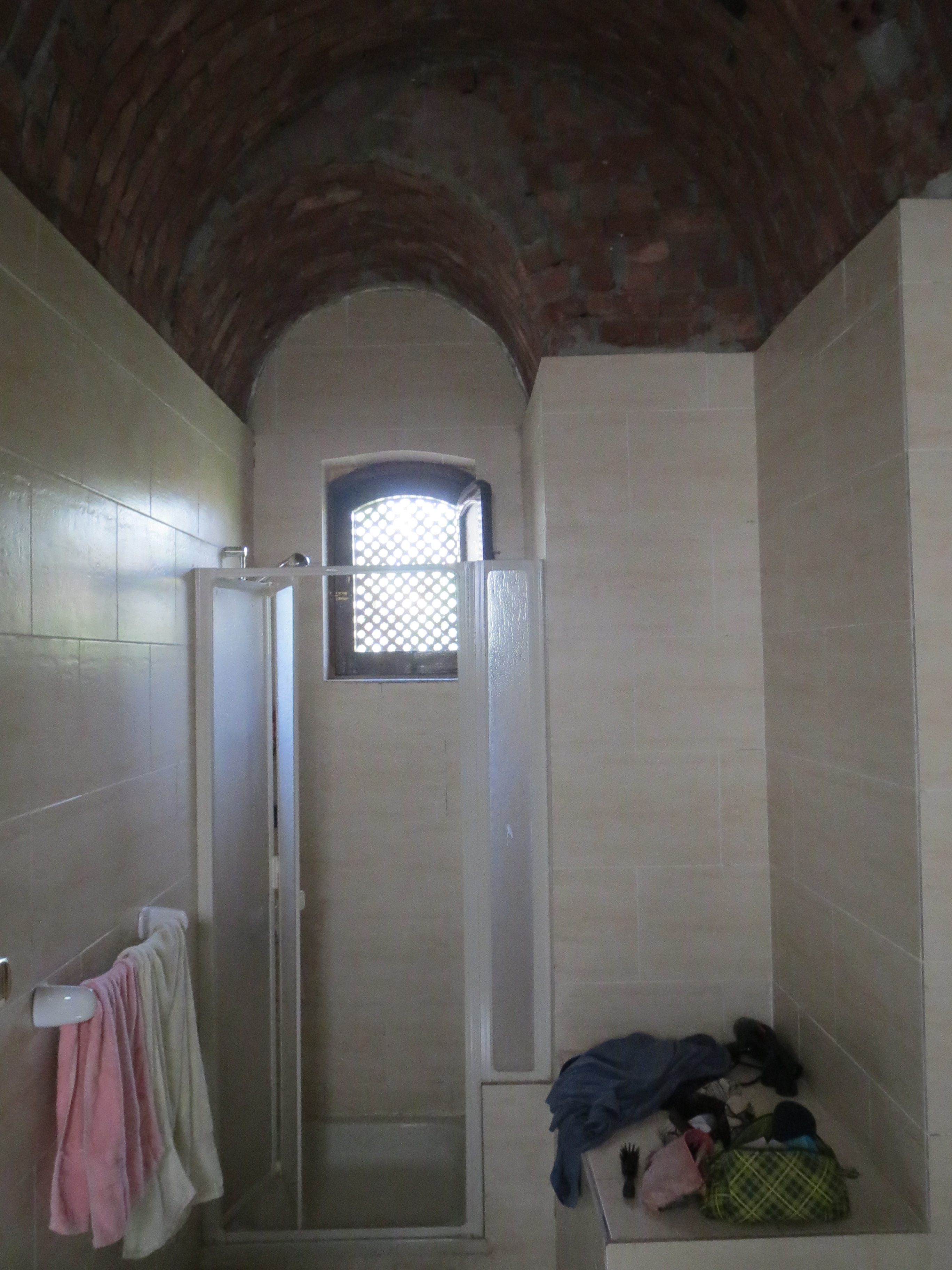 We used a couple of bikes for our two full days there to get us easily about, as distances on the west bank are well within reach, and they also let you take them on the ferry to get around the east bank too. The ride up from the hotel towards the ferry and the sights of the west bank through the farm lands was delightful in itself. 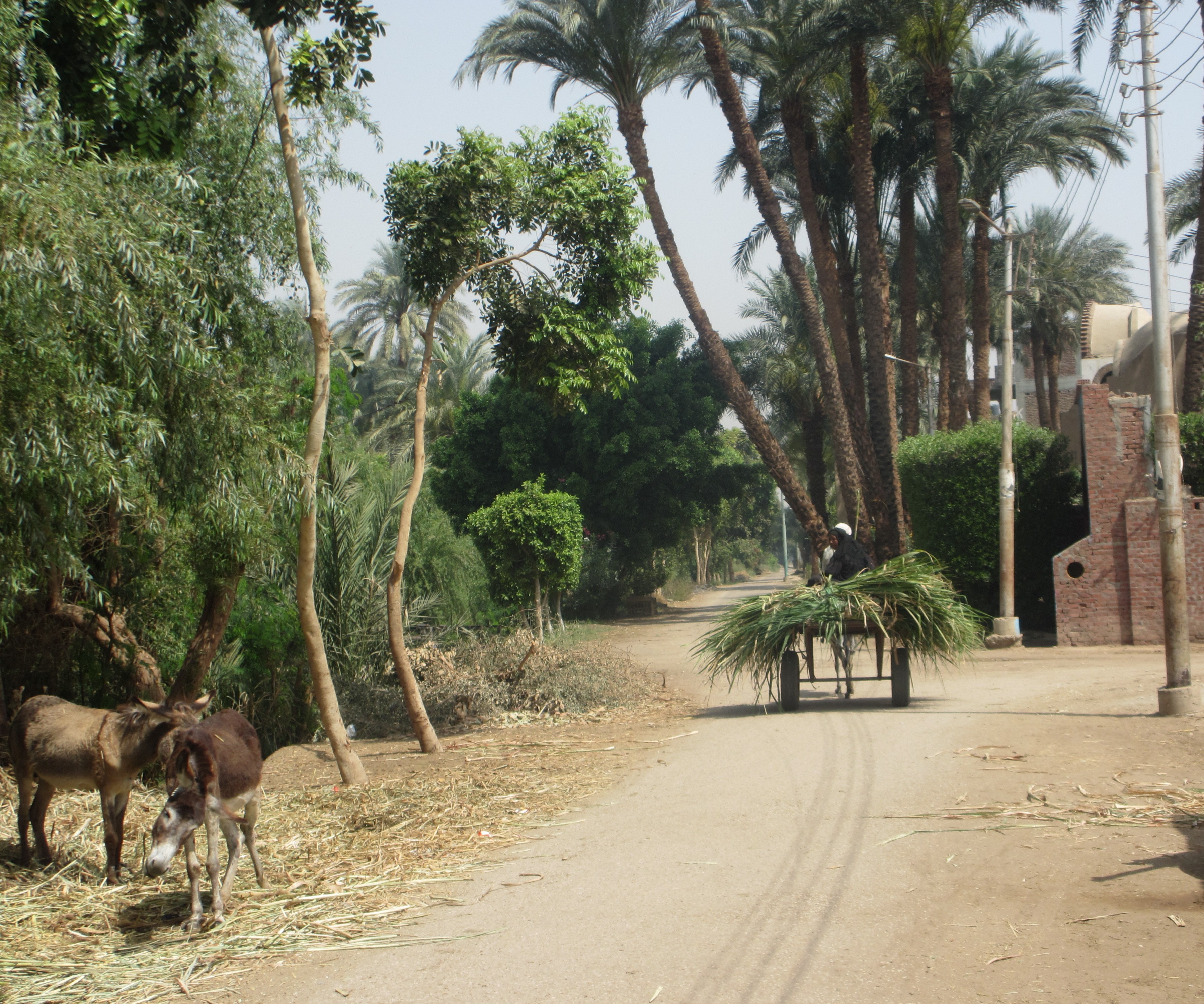 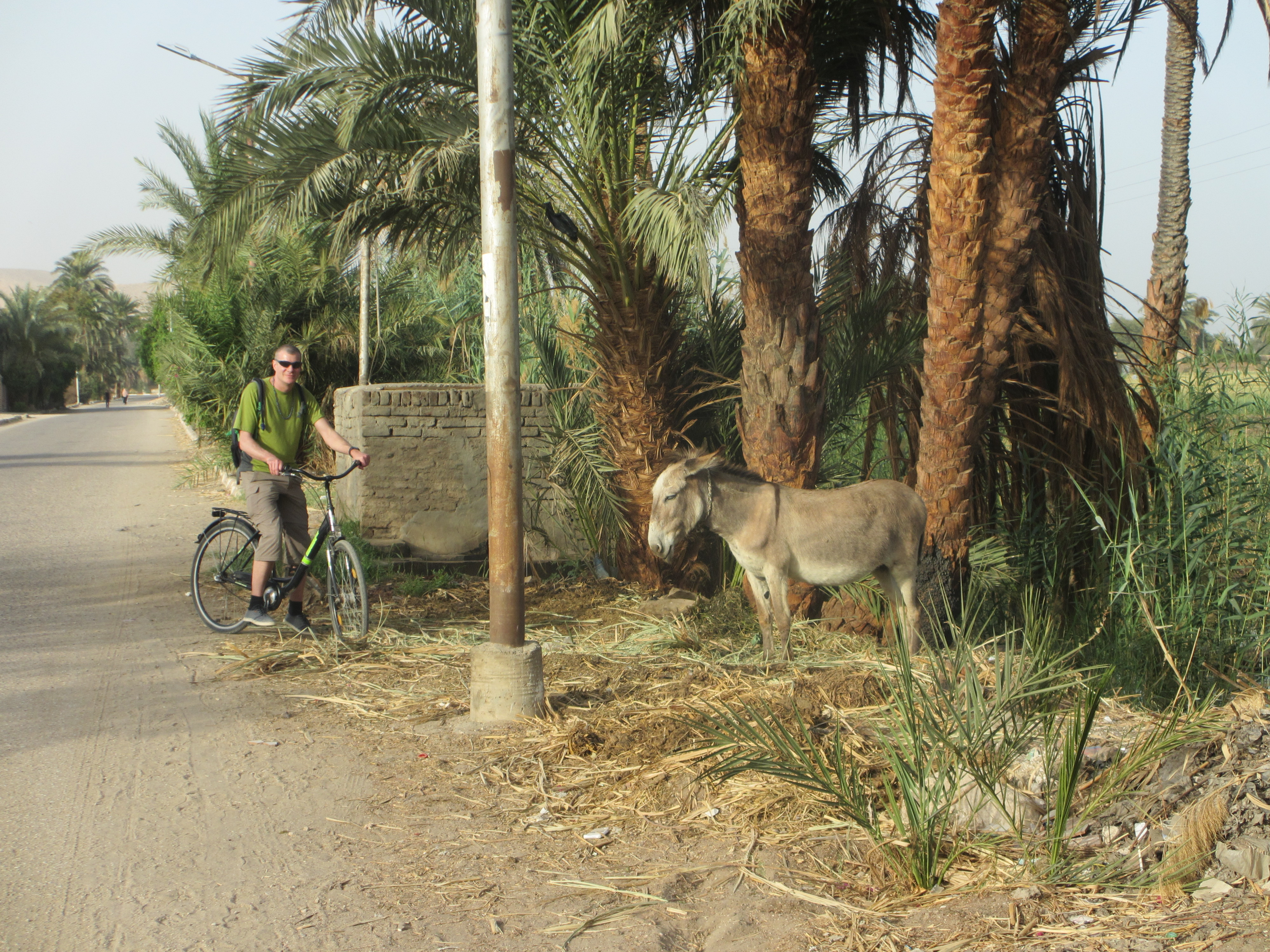 They use these simple pumps to lift water from the cess-pit of a canal to irrigate the fields: 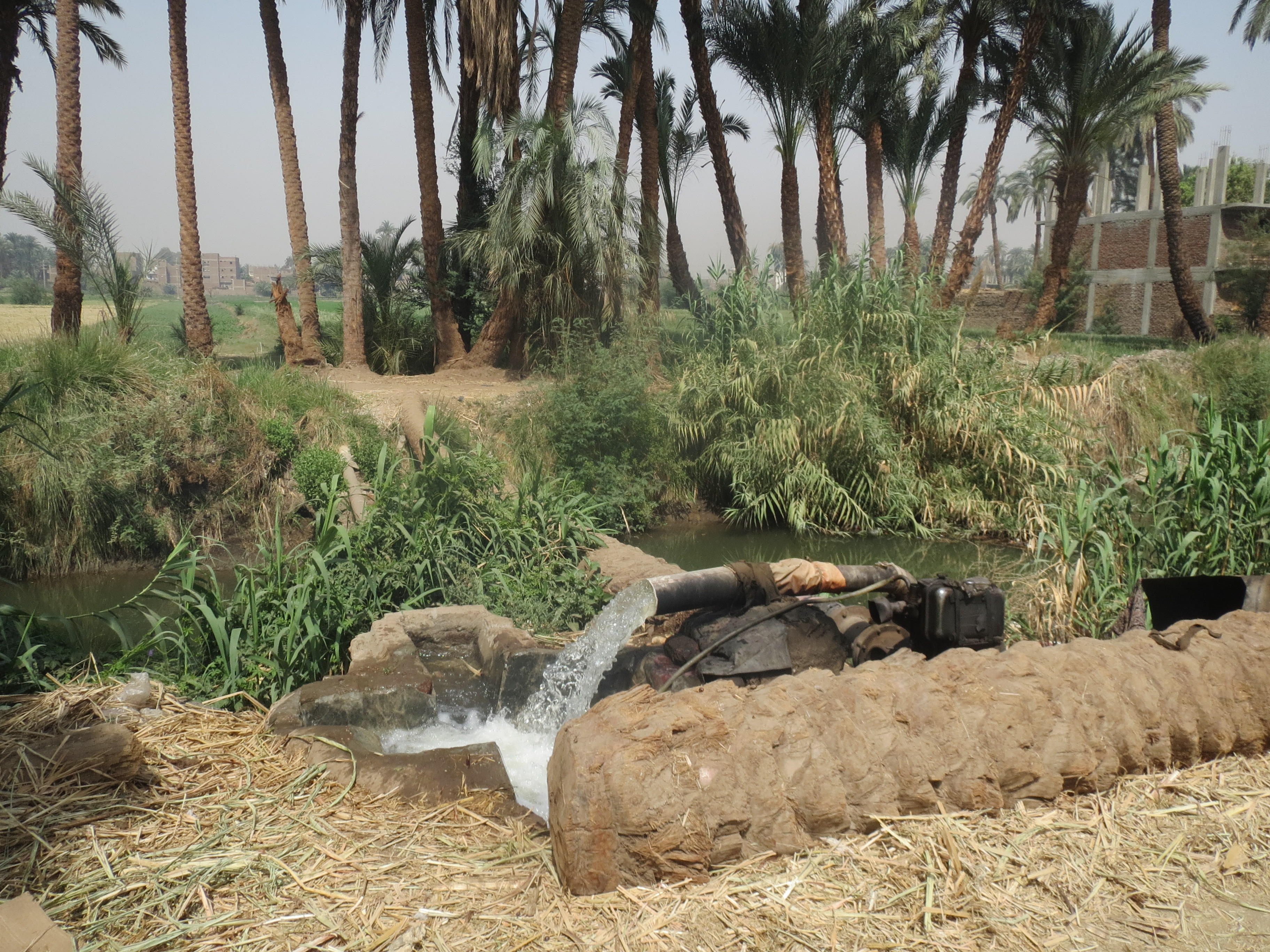 We woke up a couple of camels, they look like they may be hubby and wife, don’t they? 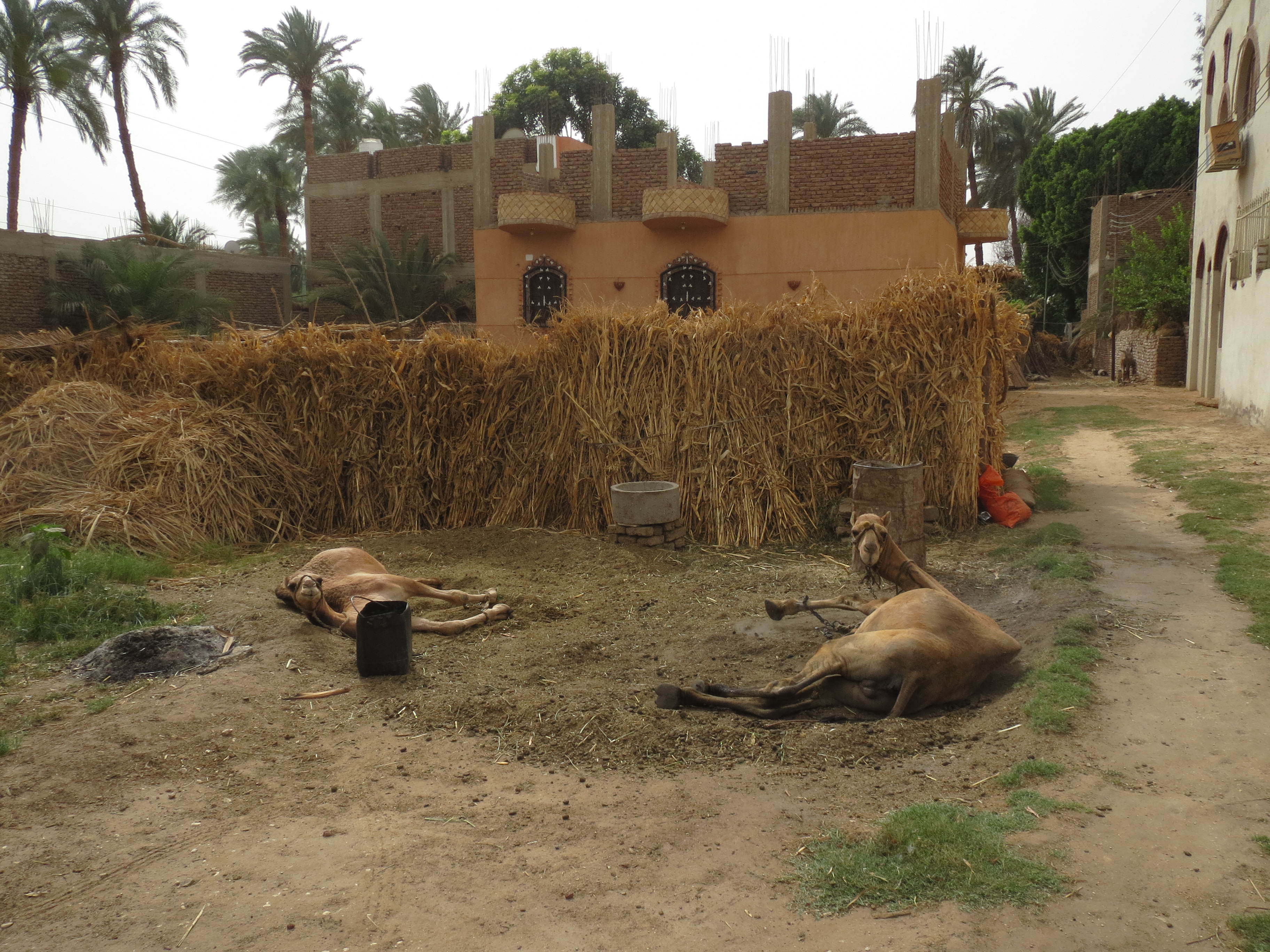 We first went up to the Valley of the Kings, fairly high up in the desert and well beyond the fertilising influence of the Nile. There must be 30 or more tombs up there, dug into the sandstone, including that of Tutankhamun. We don’t have a lot of pictures up there as you’re basically not allowed to use your camera unless you bribe the guards on top of the normal baksheesh you have to give them anyway. We went inside the tombs of Ramses III, Ramses IX and Merenptah which are three of the more impressive ones. We didn’t bother with Tutankhamun’s as it’s a fairly hefty surcharge on top and is apparently fairly unimpressive inside compared to the others anyway.

Cycling up there is up a fairly long, steady climb which is not too difficult, even in the soaring heat. 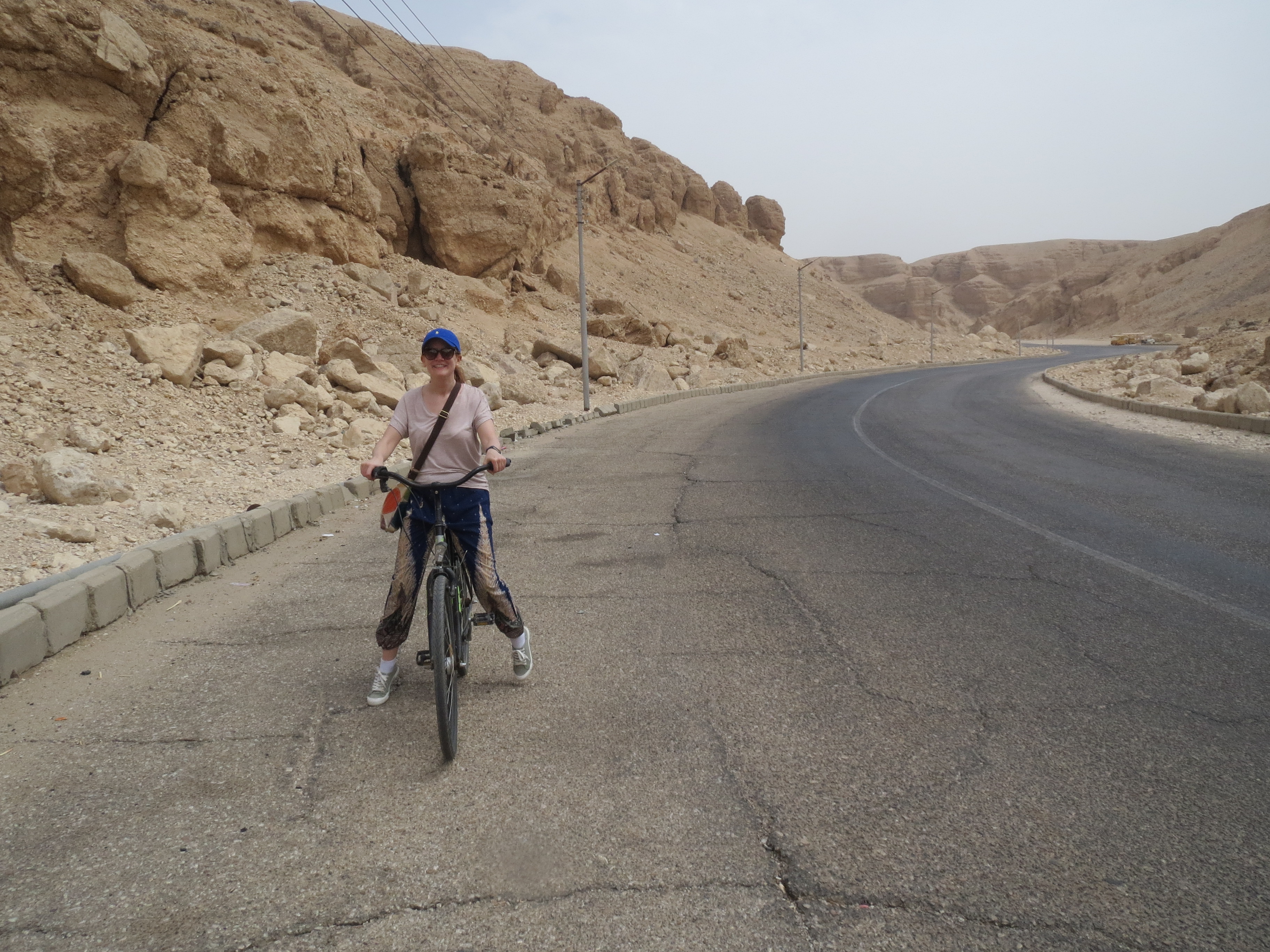 A cemetery in a remote spot halfway up to the valley: 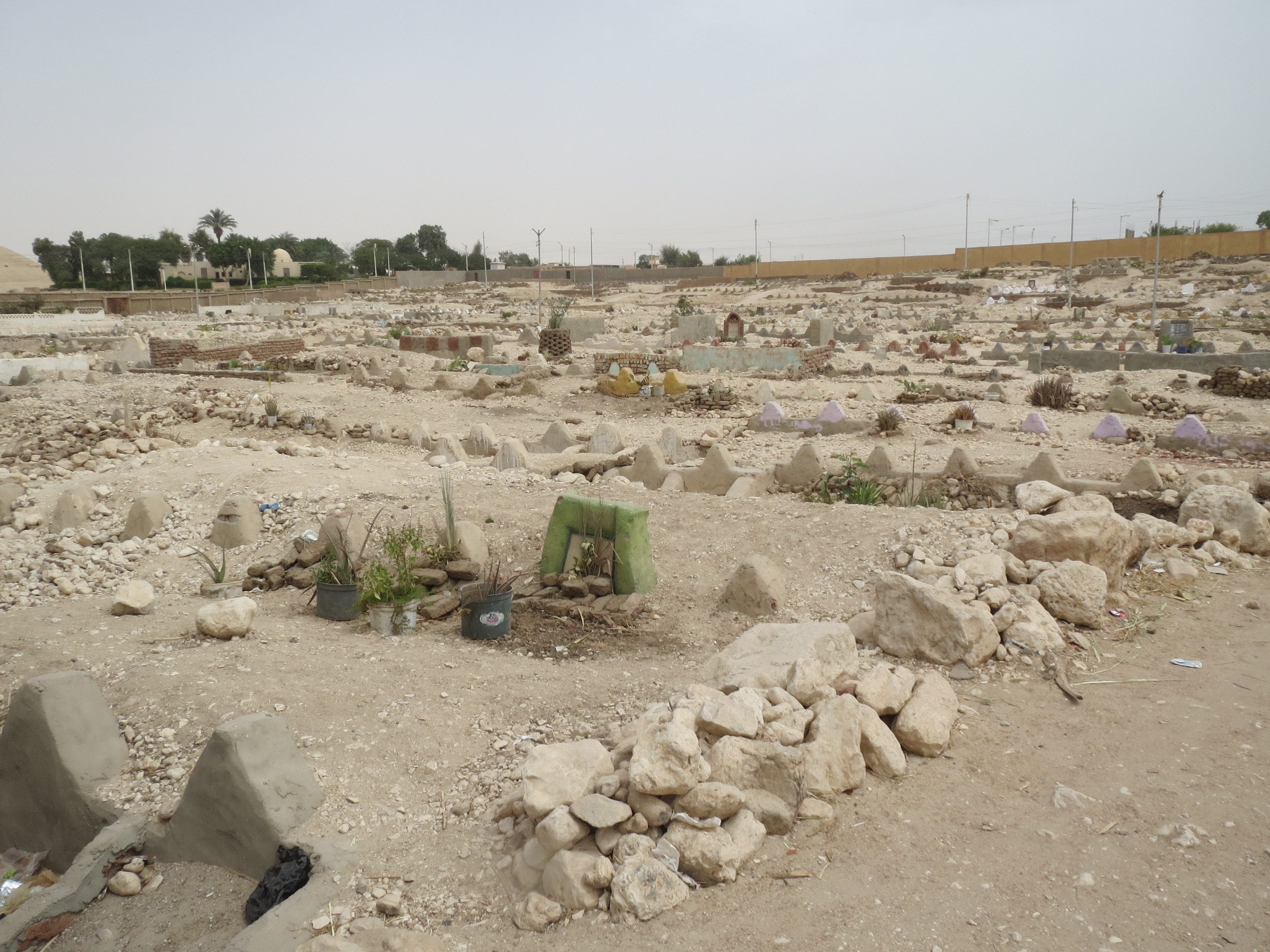 There’s stuff like this littered all over the west bank, scores of tombs and statues everywhere: 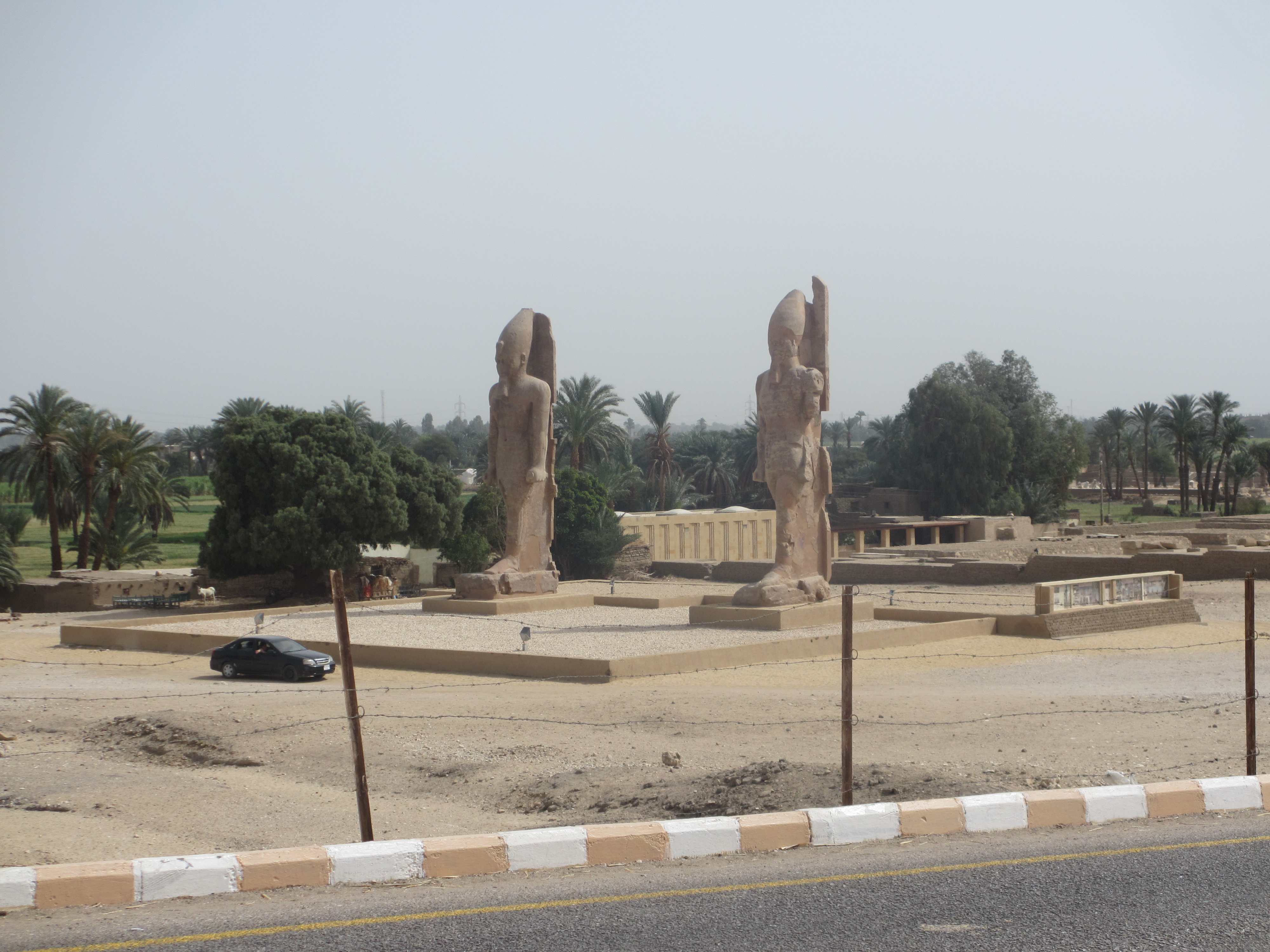 Some of the few signs of civilisation on the West Bank, even though this looks  more like a postcard. I suppose that’s the weird effect on the lighting due to the sand. This was a lunch stop at “Restaurant Mohammed”, close to the main ticket office, which is to say it’s in the middle of nowhere. It was probably the best meal we had though: The restaurant’s resident cat, who seems to be bored of my advances: Later in the day we did Medinat Habu, yet another mighty impressive temple mostly attributed to Ramses III. It was common for the pharoahs to have baboons as pets, and these are often depicted on the walls, sometimes they have them mummified with them too. Even at this point, I still struggle to believe that this stuff is some 5,000 years old. You can get an idea of scale by looking for the Little Lisa in the doorway here: Our last main stop on the west bank was the Tombs of the Nobles, there’s about 600 of these all in the same area, dating between the 6th dynasty and the Graeco-Roman period. We managed 5 of the 600, you buy tickets for them from the central ticket office, but when you get out there to the deserted site, you find that the actual tombs are locked, until a guide springs out from behind a rock and unlocks it for you. You have to give him some basksheesh, of course, and when you’re out he points you towards the next tomb your ticket allows you to go into, of course this time a different guide appears from nowhere to let you in. 5 tombs, 5 guides, 5 lots of baksheesh….

You’re not allowed to take photos as usual, but I did pay over the odds to one of these dudes to get a couple of pics inside Amenenope, we think it was.  The grate on the right of the first picture covers a shaft leading down into deeper parts of the tomb, where robbers would’ve dragged out the sarcophogus from at some point. I remember as a child back at home when a baker used to deliver bread to our door. It still happens on the west bank.