The temples are indeed very impressive, most in a remarkable state of repair given that they’re 900 years old or so. And there are so many in a fairly small area, you really could spend at least a week exploring them all if you felt so inclined. This one is The Bayon, one of the more famous ones. 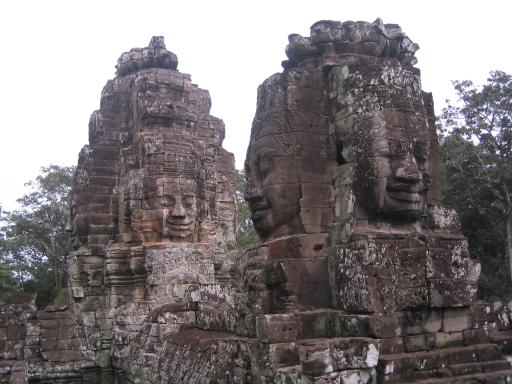 On the way I came across a right cheeky monkey

I have big balls, do you want to see them?

I’ve done my 3 days up there in the scorching sun on my bike, so if I never see another temple it’ll be too soon at the moment..

Went with the English lads to a bar called Dave’s Dead Fish Tower, an odd name as there is no other reference to any fish in the bar, living or otherwise, sea food is not commonplace in Siem Reap in general as we’re miles from the sea, and there’s no tower on the building either. The Cambodian barman claims to be called Dave, but I’ve yet to meet many locals named after any saints, much less the patron saint of Wales, so I think this may be somewhat unlikely. What they do have though is an open pit full of crocodiles, some of them 4 or 5 feet in length, right in the middle of the bar next to the toilets. To actually get to the toilet you have to cross a small bridge with no handrails right over the pit, and it is possibly the most dangerous situation I’ve seen since I’ve been travelling, it wouldn’t pay to get too pissed in there and stagger to the bog… You feel so nervous getting there that by the time you arrive it’s a wonder that you haven’t already been! A sign advises “The crocodiles will not harm you unless you play with them”. Perhaps falling into the pit, out of your mind, is not perceived as “play”.

Last night in Siem Reap and treated to a nice sunset before I fly in the morning to Vientiane. 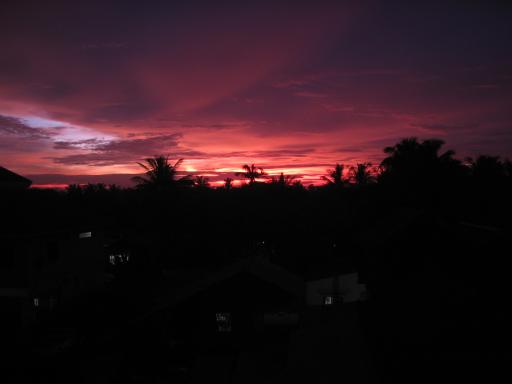