We saw Kill Bill, and as it’s now open in the UK I can spoil the plot – she kill’s Bill. There you go…

Arapahoe Basin had 2 or 3 inches of new snow so was in pretty good condition by and large. I was on a death mission and was practising launching myself off a 5ft cornice onto rather icy snow which was great fun.. Other than that it’s been a fairly quiet weekend spent just hanging about with Iain and Wendy, including an Indian restaurant last night which was a strategic mistake on Iain’s part considering we’re staying in his house. You learn by your mistakes, as they say.

As promised it’s photo time! This was the “Double O” arch at Arches National Park.

and another shot of it through the middle. 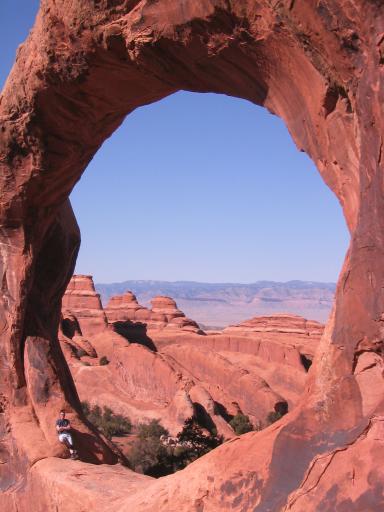 You’re not allowed to walk on them but what the hell. This is a stark contrast between the 80 degree heat there and the mountains beyond. 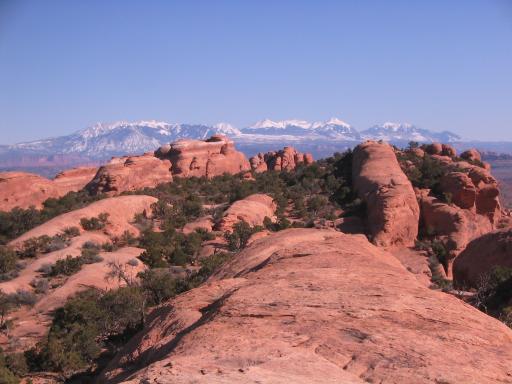 At Capitol Reef there is a 1,000ft drop just beside my left foot. The weather was so good we wished we’d hiked up with the tent and camped there, but never mind. 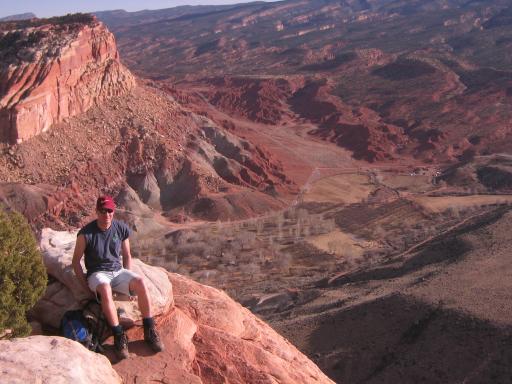 We seen surprisingly little wildlife on the whole trip really, but we did see some at Tahoe.

The locals were surprisingly friendly as well. 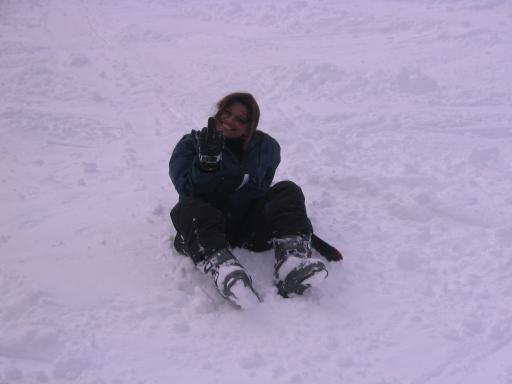 A neat feature of Tahoe is the ability to ski across the stateline, on the Nevada side are where all the big casinos are at. Our motel was actually about 50 yards on the California side so was all very handy…

Here were the Essex guys and girls, Michelle, Justine and Steve.

Next, in Yosemite were the Vernal Falls, the guy standing at the top gives you some idea of the scale. 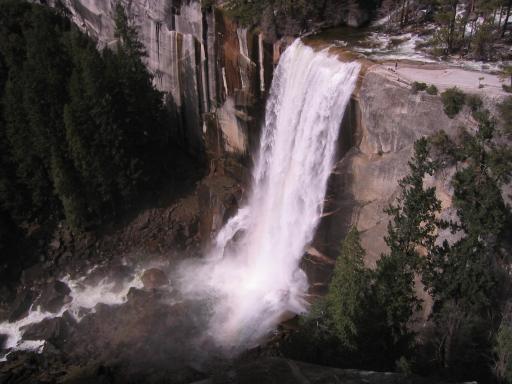 Onto some city life and the usual San Franciso sights, the Golden Gate of course. 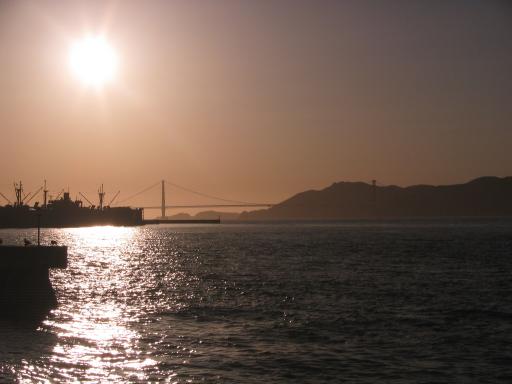 Steve had had enough of me at one stage! (see sign above phone)

This is Alcatraz from a boat (fairly obviously). 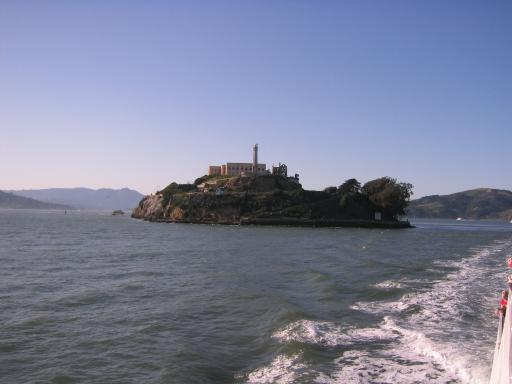 Here is one of the cells where Frank Morris and those guys escaped from a la Clint Eastwood film, supposedly preserved as it was left at the time. 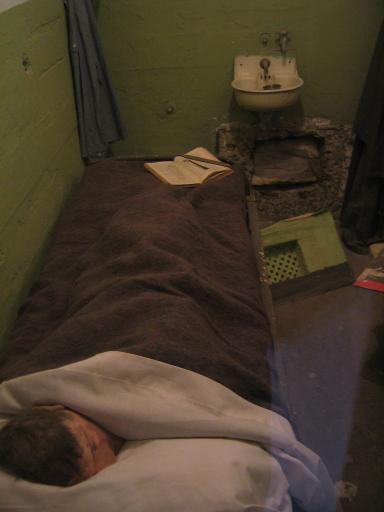 And finally one of the famous cable cars that run up and down the steep hills. We did catch one of these for the purposes of meeting Ray and Beata at a boozer, so we actually felt a bit less like tourists by catching one for a real transport reason! 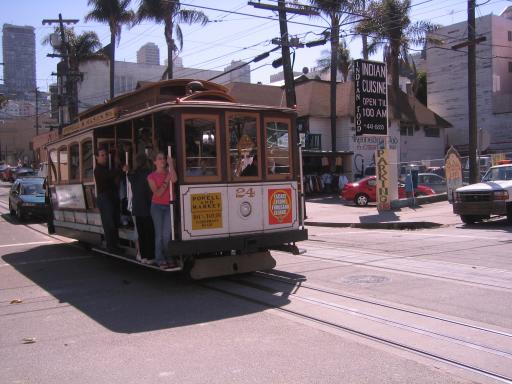 On the way up the coast we stopped off at the giant Redwoods, these things grow in excess of 300 feet tall. 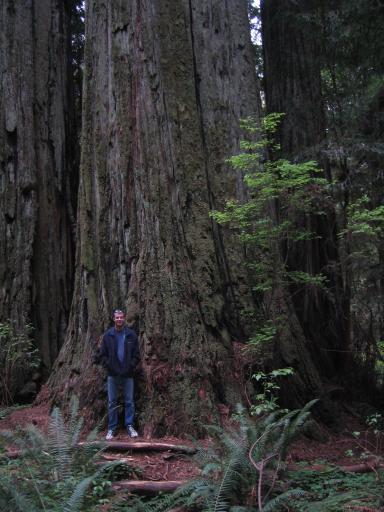 Next in Oregon this is Crater Lake, on top of an extinct volcano and still under at least 6 feet of snow when we were there. 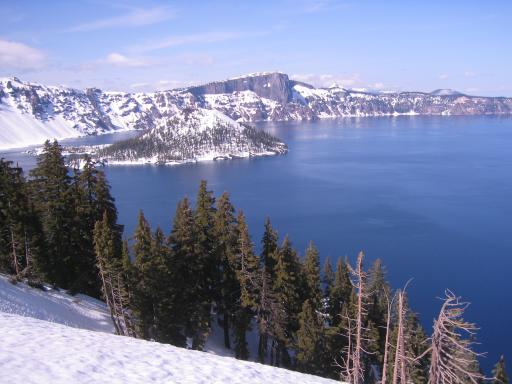 In Washington state we did our backcountry camping trip, here is dinner cooking in the campfire, note the two steaks on the hot rocks in front with two super-heated baked potatoes behind somewhere. 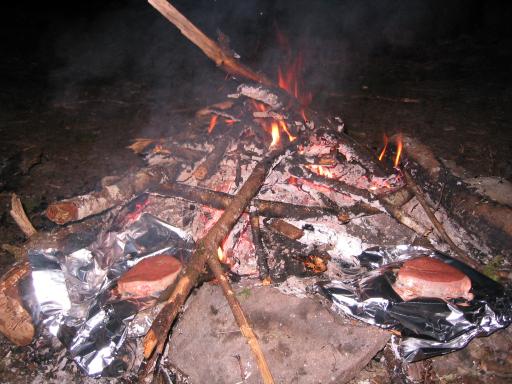 During the night you have to hang your packs to keep them safe from the hungry bears who would have loved to tuck into our steaks, followed by us for dessert. 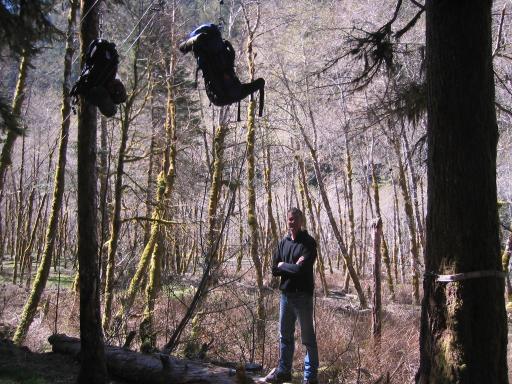 These next shots are from Yellowstone, this is some of the small amount of wildlife we’ve seen the whole trip, a bison and a deer thingy. 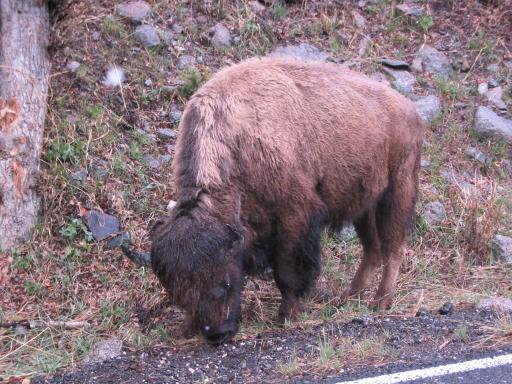 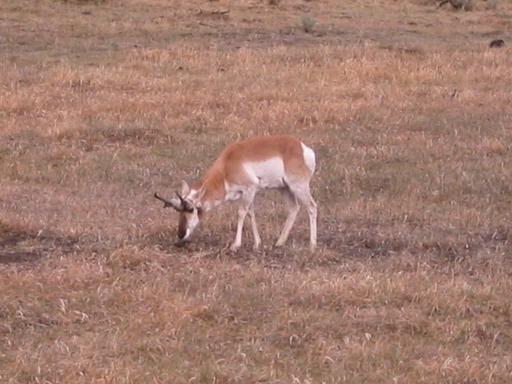 We did see thousands of these mind you, but no bears sadly. Further south in the park, the Beehive geyser, it only blows once a day and we got there just before it did. Once again the people give a sense of scale, it blows 180 ft into the air. 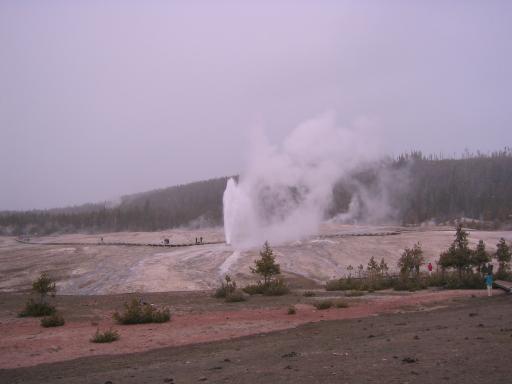 Then Old Faithful went shortly afterwards. We were so lucky here, in addition to getting the timing of the geysers right, they’d only opened the road after it’s winter closure to this area the day before we were there! 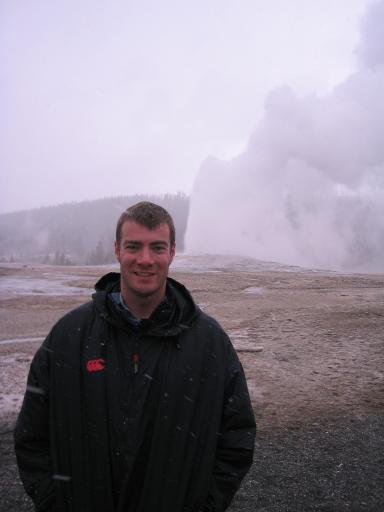 Right, that’s quite enough of that for now. We’re busy packing up before a final night on the razz with Joe and Iain, then in the morning we leave for New Mexico.

Back in Denver at Iain’s place. We managed to wangle a week’s free membership at a local gym so we have the chance to be active once more. Today we’re going to hit the climbing wall probably and then finally to see Kill Bill. We got 2 or 3 inches of snow build up in Denver over the course of last night so with any luck we’ll be hitting Arapahoe Basin tomorrow for a good final day’s skiing. They should get quite a build up there, as it’s over 13,000 feet at the top of the lifts.

I’ve offloaded the photos from my camera of the road trip so far, will sort through them later and upload a few choice ones.

Made it to the town of Gardiner just at the North gate of Yellowstone Park. Crossed through two more states to do this, Idaho and Montana. This turned out to be a cool little town really, we got a nice motel for virtually nothing and ended up doing a crawl of various local bars where we were once again the objects of much curiosity. We ended up getting a lock-in at one place until 3-15 with the bar maid making us free cocktails and JD and Coke’s…

Then we found we had totally lucked out with the park, just the day before the road through to the Old Faithful geyser was opened, would have been a bit of a tragedy had that been shut. So we hiked for one day in the hope of seeing wild life but saw bugger all, then the next day went to Old Faithful. We again lucked out with the timing, within 10 mins of arriving the nearby “beehive” geyser shot it’s load which it only does once a day, 180 feet into the air. Then 20 minutes after that the Old Faithful blew off too, which only goes about once every 90 minutes.

Now we are in Jackson, which is the hub of some ski resorts in Wyoming, but they’re shut, there’s no hiking, biking, rafting, climbing, fishing or pretty much anything to do, as the winter season has shut here and the summer one is not yet open. There’s sod all on telly either really… We did do a short hike through a snow caked trail to see a frozen lake which was, well, frozen really. Now we’re about to go out and try and find a restaurant that’s open, then we’re going to see Kill Bill vol II, I’ll be spoiling the plot tomorrow for those in the UK as it’s not yet open there 🙂

Going to do a long day driving back to Denver tomorrow, there’s not much else to see en route.

Amazingly it was a fairly quiet one last night (i.e. we got home at 1:30am) but still quite capable of walking. So before Vancouver we were in Whistler for a couple of days in Janet’s cabin, very nice up there and a fantastic view of the slopes from the balcony, but in a way that was a bad thing as it put me off skiing as the conditions looked pretty crap up there. Steve went, and indeed it was fairly crap apparently.

Today we start the long journey back south, we’re not sure what route to take yet but it may be over the Canadian Rockies or south to Seattle and then east. We’re heading for Yellowstone ultimately.

More updates tomorrow as I have to run for dinner with some people we know in Vancouver. It’s my birthday today so…… HELP!

A quick one from Whistler in Canada – we have the use of Janet’s cabin share which is a nice change from a motel for a few days. Janet is a friend of Steve’s he met in Alaska a few years ago. Crossed the border yesterday having done a night backcountry camping 9 miles into Olympic National Park which was also quite an experience. You have to suspend your food from the trees to stop the bears getting it!

The previous night we spent in the town of Bellingham just south of the border, but not a lot else of any note to report from Washington. Yesterday we went sea kayaking for a couple of hours in Dove Cove just outside of Vancouver, was a lovely sunny day and got a few miles in on calm waters in the bay.

In a library in Aberdeen in Washington state – massive hangover so excuse the drivel. Went for a “quiet one or two” in a few locals’ bars last night, which turned out to be cheap and cheerful.

So we’ve been 4 days on the road from San Francisco up through Oregon which have been fairly uneventful really, we stopped off at Crater Lake, an extinct volcano now full of water (fairly obvious, I know…) In the last post I completely forgot the fact that we spent 2 nights in Yosemite, after leaving Tahoe and on the way to San Jose. We slept in a tent cabin thing which has been our closest brush with nature as yet and did a hike up a couple of highly impressive waterfalls as the spring snow melt is in full force at the moment thanks to the unseasonably high temperatures. The actual trail was a bit mainstream for my liking, but then it’s a bit of a touristy place.

Today we’re off to Olympic National Park, up in the very north west corner of the States apart from Alaska. We might even do some back country camping up there in fact as the weather is pretty nice at the moment. Yesterday we actually had a little bit of very light drizzle which is the first rain we’ve seen in the 7 weeks we’ve been out here!

We’ve found out that we’ve got the use of a time share in Whistler in Canada through a friend of Steve’s so we’re heading over the border for that at the weekend and should hopefully get some late season skiing in with any luck. Apparently they’ve had some recent big snow up there so conditions are good.

The snow continued to deteriorate at the Heavenly resort, and to be honest as a resort it was far from my favourite anyway, it seemed hard to get around it and you had to do a load of poling all over the place. We discovered the nearby resort of Kirkwood though and spent a couple of days skiing there, this was far superior and is one of my favourite resorts ever. It even saw me doing a load of double-blacks and staying on my feet which is something of a miracle.

After that we took a drive down to San Jose and stayed with Tony Lisamore for a couple of nights, quite a nice little town really with some fairly lively bars which we just had to try out. Yesterday we moved up to San Francisco and stayed in a motel a stone’s throw from Fisherman’s Wharf. Yesterday we did the obligatory Alcatraz trip which was pretty good actually, the holes in the vents at the back of the cells where the guys escaped from are just like those you see in the Clint Eastwood film.

Went out last night with Beata and Ray that I met last Christmas on a Trek America trip in and around Mexico, they are on good form, we’ll probably spend tonight on Ray’s sofas actually to save us a few bucks. It’s fantastic weather, about 75 today and we are all in our shorts and working the tan nicely…. Today we’ll probably take a cruise around the bay and go for a goggle at the Golden Gate bridge. We took a cable car tram thing last night on our way to the bar so that one’s ticked off the list as well.

Then, it’s on up the West coast on our way to hopefully Whistler in Canada to get a few days’ spring skiing in as well, conditions up there are great at the moment apparently.