Right, this is a long one as we’ve passed through 3 States since the last update, so if you get bored easily, disconnect now…

Spent our last evening in Frisco drinking with Joe Morales, a guy from work that I first met in Australia. Several shots later and a few hours sleep and we were on the road to Utah. First stop was Arches National Park which was fairly amazing stuff, there is shots of us teetering on top of the “Double O” Arch which is highly illegal but should make a good photo. Temperatures here were in the mid-70’s, quite a contrast from the mountains of Colorado from where we had just come. In fact the whole of the South West is in the midst of a record breaking heat wave at the moment so we are baking here. Then we went to Canyonlands and hiked 1400 feet down a ridiculously steep cliff face, only to have to hike up again (wish we’d thought of that at the time….). Stayed in the nearby town of Moab and encountered Utah drinking laws for the first time, where it’s pretty hard to get a drink without having to sign up for membership of a “private club” which is basically a bar, we tried one but after being accosted by a pissed local as soon as we set foot inside we thought better of it…

Then we headed out west again on Route 50 which is dubbed the loneliest highway in America, and they’re not kidding, this road goes on and on for hundreds of miles without out hardly seeing a single car much less a town or any people. We stopped each side of Capitol Reef National Park and hiked to the top of yet more 1,000 foot cliffs there. Next we hit Nevada, the notorious gambling state and stayed in a great little town on route 50 called Ely and hit the town and casinos until 3:30 am or something. Next day we carried on to Lake Tahoe which is where I am now and finally located an internet connection (!). Skiied yesterday in temperatures of 60 degrees or so which is so hot it’s affecting the snow, so decided to have a day off today and waiting for the snow which is meant to be coming on Friday. Tahoe’s in California but the resort of Heavenly we are in is so large you can ski across into Nevada, and so last night we hit the casinos and club where any drink is a dollar, until about 4:30 or something. We’ve met up with friends of Steve from London, Michelle and Justine, who are out here for the week skiing as well.

Time’s up, must get off this computer and back to bed…

Racing against the clock on this computer, so… skiied Vail the other day, very poor snow conditions unfortunately, as it was so hot. Then today we were supposed to hit the road, BUT it dumped 6 inches of snow overnight so we stayed around for an extra night to ski Arapahoe Basin, a staggering 13,050 feet above sea level at the summit. Now we’re knackered…

In Steamboat Springs in a fantastic time share that Joe got for us. We have just spent the morning chilling in the pool, outdoor hot tub and sauna/steam room etc. Yesterday the skiing was more like ice skating as temperatures hit 50 degrees which was a shame, but you can’t win them all.. Missed the night out last night thanks to the crate of beer, bottle of Jeigermeister and bottle of Tauca that we foolishly purchased for a “livener” before going out, but the rest of the guys had a good time apparently. It seems like quite a happening town.

Hit the road in half an hour to head for Frisco where we are staying as a base for skiing in the ever popular Vail tomorrow. We’ll be there with Iain, Joe and Wendy tonight, then on Monday myself and Steve begin the trip West to Arhces National Park.

Hiked up Bear’s Peak the day before yesterday, a trail described as “strenuous” which it certainly was, given that it has a vertical ascent of nearly 3,000 feet up to an elevation of 8,461 feet, with snow underfoot for some of the time. It is supposed to take 4 to 5 hours, we did it in a little over 3, thanks to being late arriving due to Joe’s poxy directions which sent us off to completely the wrong trail head. On the way up you pass the Devil’s Thumb.

At the summit, in typical fashion, the bloody mobile rang (can’t get away from the damn things wherever you go). It was Joe, so I was giving him shit for his dodgy directions.

By the time we got down, it was just about totally dark! Had a quiet one yesterday, Steve foolishly went for a jog whilst I took the truck in for exchange as we had an electrical problem on it the other day, causing the lights to flash dim and bright as you were driving along, much to the frustration of the drivers we were behind. Got a tasteful maroon number now.

We are leaving Iain’s today to head for Steamboat Springs, another ski resort about 3 or 4 hours North West of here. We’ll spend two nights there then head back to Summit County somewhere and ski Vail on Saturday. Then myself and Steve will start the road trip out West directly from there. Photo uploads are likely to be sporadic/non-existent from now on as we’ll be reliant on internet caffs for updates, so whatever we tell you, you’ll have to believe from now on 🙂

Went to a semi-cowboy, semi-normal music bar in the suburb of Evergreen on Saturday night. A real laugh watching the 45+ year olds tapping off with one another. We got home at 2am only to have to get up at 5-30 to ski Winter Park on Sunday. This was great, we actually skiied the more hard core Mary Jane side of the resort where they do not believe in piste groomers much, so was great for pushing hard on the moguls and learning how to fall down in style. We were also blessed with glorious weather, and now I look somewhat like a lobster with panda eyes. Never mind, it will all peel off soon enough.

Went for dinner at “Chillis” last night, you can imagine what Iain’s flat smells like today… We decided to leave promptly when about sixty 15 year olds from a church group turned up and occupied all the tables around ours.

Snow-shoed the other day to Brainard Lake. 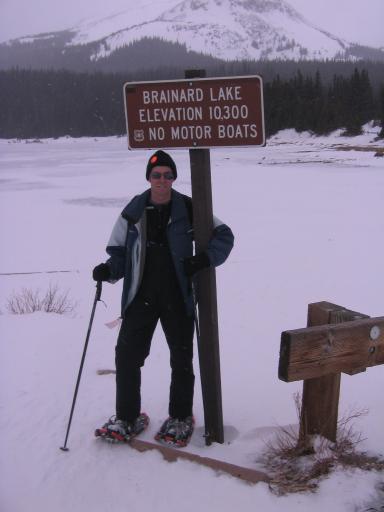 On the way up there we came across this guy who scared the **** out of us,  but he seemed pacified enough when we turned around and legged it, screaming like a pair of girls. I think we both broke the 4 minute mile on a pair of snow shoes which was mighty impressive. 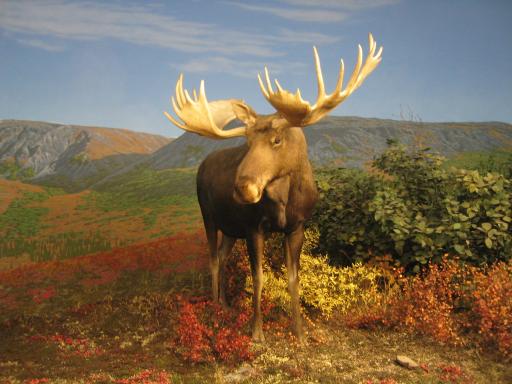 More tame was my new friend who seemed to like eating Power Bars. No doubt a few minutes after this shot was taken, the poor sod dropped dead out of his tree after a hideous sugar overdose. 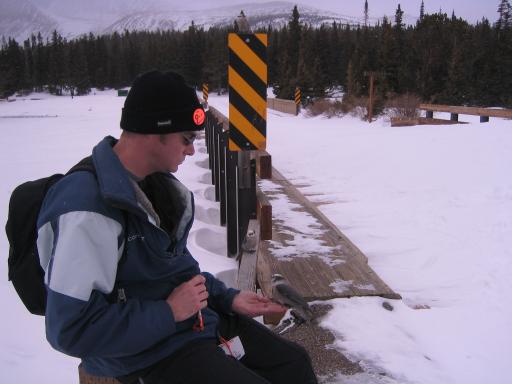 Yesterday we hit Copper Mountain again, Iain and Wendy got the day off along with Kathy from Wendy’s salon so we made a nice day of it. 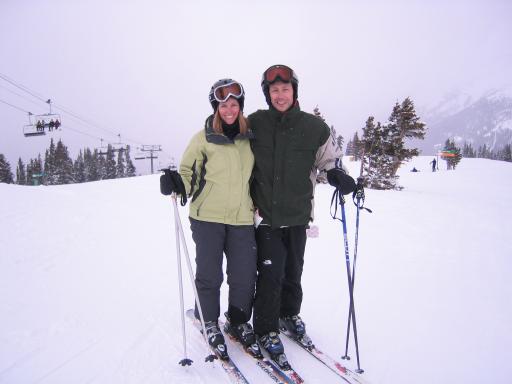 Taking it easy today, then tomorrow we’re planning to go to Winter Park, another ski resort of Summit County, 70 miles or so west of Denver. 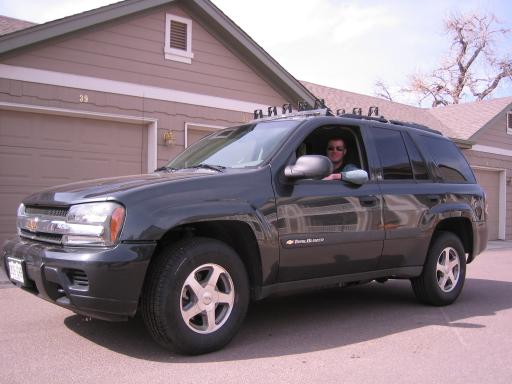 Copper Mountain yesterday was COLD at -20C, strong wind and horizontal snow. It makes for an interesting trip down the slope when all you can see through your goggles is white, which is particularly enterntaining when you accidentally come off the side of the piste where there is a 6 foot drop to the snow down below. But it’s all a “challenge” as the saying goes. It also took us 3 hours to get home as some dick decided to crash in the Eisenhower tunnel which is the only way in and out of the mountains on the interstate.

Myself and Steve now have our own wheels for the rest of the trip, we had paid up front for a mid-size regular car but got lured by the temptation of a cheap upgrade and now have a brand spanking new Chevy V6 4.2 litre 4WD SUV. It’s nice and should be a worthy long term investement to help us get up the snowy mountains, and is also handy as now we only have to give way to 18-wheelers and buses. But now we may just have to find some bar work to pay for the extra petrol.