I spent a couple of nights back on the safe haven of Tao. I stayed in a different set of bungalows for a change, just on the other side of the head where I normally stay, in another fine cabin with a view over Shark Bay 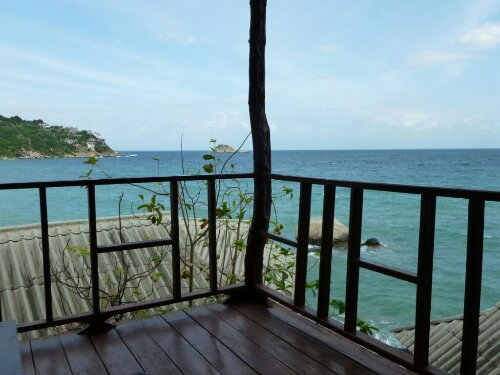 The resort sits isolated just above the bay 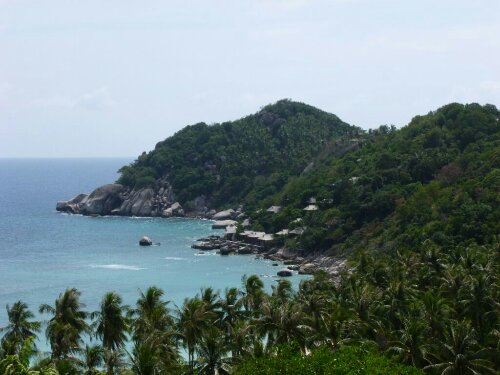 There’s some steps just below the bungalows which help you get into the water, so I went in twice looking for sharks, but they were being shy on this occasion. In an effort to avoid eggs for breakfast, I’ve gone for the old faithful tomato soup, 3in1 coffee and fresh coconut combination breakfast today 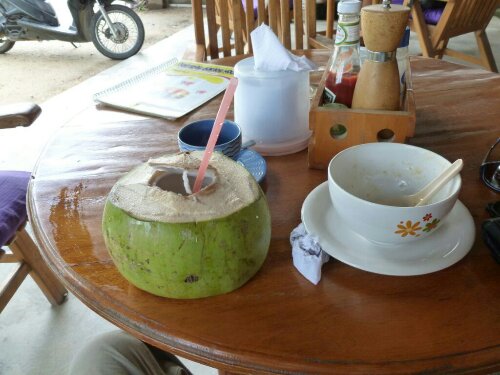 Aside from that it’s been a quiet couple of days. I dragged myself up to the High Bar last night for a late drink and got talking to a few people, including one Swedish guy trying, and failing, to find a place to stay by phoning around everywhere. He gave up and went to sleep on the beach in the end. The bar is High by name and high by nature, it’s up the steepest and twistiest track ever, a hell of a challenge to keep the front wheel of the bike on the floor on the way up, and as for going back down…. Earlier I took a spin up to Sairee, the small town towards the north of the island, this is the main backpacker hangout and I don’t go up there very often really. When I first came here in 2004, there was no electricity and a night out consisted of drinking in candlelight on the beach whilst a man played guitar. Now, Sairee has bars pumping out music, a couple of girlie bars, lots of international restaurants and there was even a ladyboy show.

Today then is the marathon journey to Penang in Malaysia. I’ll take a boat at 14.30 and spend 2 or 3 hours in the town of Chumphon before getting a train at about 22.30. It reaches the border around 8am I think, and then takes a further 6 hours to Butterworth, which seems way too long as it’s not that far from the border really. I expect we all have to get off the train for a couple of hours or something to clear immigration.