As a man once wrote, I’m on my way to Mandalay. I’ve been forewarned that it’s one big old stinking dump, some travellers say it’s best avoided altogether in fact. Anyway, I’m flying back from there to Bangkok on Saturday, as they’ve very recently begun international operations from that airport. Previously, the only way for foreigners to enter and leave Myanmar was via Yangon airport, as all the land borders are closed to aliens. I decided against going any further “off piste” on the Burma circuit, bus travel is pretty slow and expensive to most destinations and often will set you down in the middle of the night.

I’ll spend two nights in Mandalay, working on the assumption that I can actually find a place to stay there. As I understand it, Chinese New Year is imminent and there is talk that the northern part of the country will be even busier than normal. Fingers crossed… Currently I’m at this service station en route. 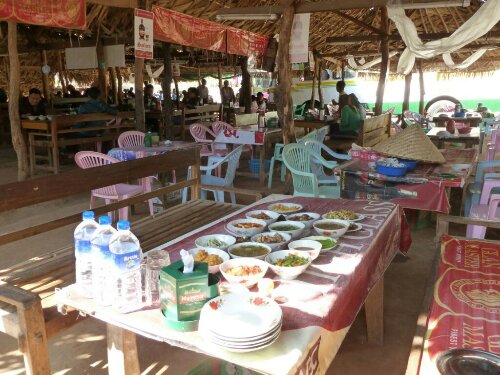 The road itself has been partly well paved, then a combination of very bumpy paving and dirt. Often the road ends completely, and the bus drives down onto dry riverbeds as there are no bridges, which must make travel pretty interesting in wet season I should think. In one case, over a very wide dry river, the bus actually goes on the working rail bridge that crosses it, with the bus literally driving along the rails. There did seem to be a man at each end, controlling when vehicles are allowed on, the idea presumably being to ensure that the train isn’t coming.

The bus is very civilised, by far the best I’ve used to far in Myanmar, but they have an obvious solution for when there are not enough spare seats.

Tomorrow perhaps I will take a morning boat for a day trip to Mingun, and this afternoon, if I arrive early enough as I have been promised I should, make a cycle trip out to the longest teak bridge in the world at Amarapura.