The speed boat couriered us in relative safety across the 30 Km or so stretch of water from Bali to the islands off the west coast of Lombok next door. The seas had died down considerably from the 6 metre waves of a few days ago, the same day my lunch blew away. It was still rough enough mind you and it always amuses me on this kind of trip to see the cool sun worshippers going up on deck to catch a few rays soon after the boat leaves port, then later when the waves start crashing over the deck, to watch them coming back down below one by one in various degrees of soakedness. 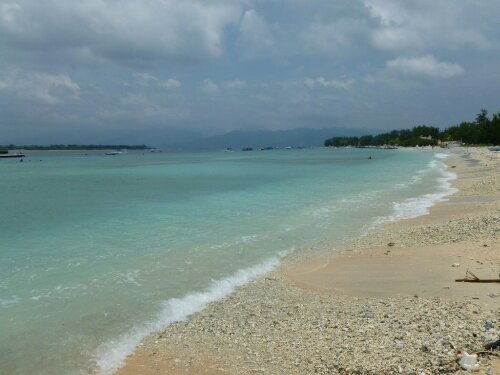 and just further down the beach from where this was taken I had lunch in a cabana and couldn’t resist one cute cat photo. These guys are eagerly awaiting the spoils of my curry, there’s three more of them on the other side of my legs too 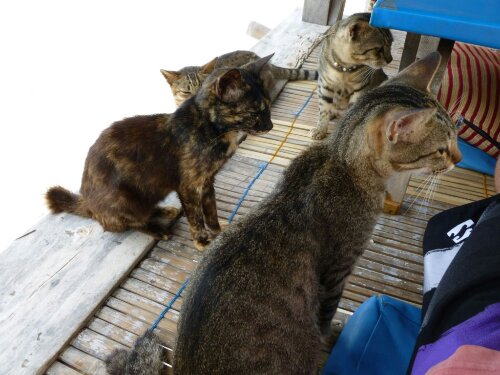 Even though Trawangan is the biggest of the three islands, it’s still tiny and there’s not a single motor vehicle of any kind. Bicycles are the order of the day for most people, tourists and locals alike, or for the big stuff, goods vehicles like this one. 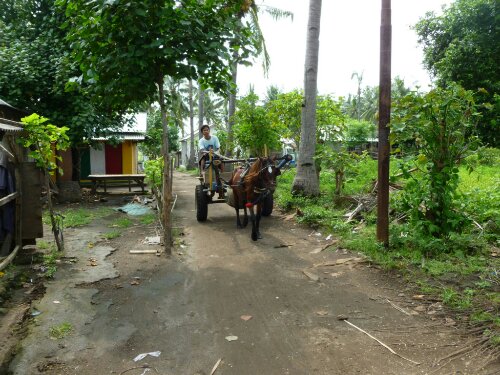 I’ve seen a few instances of the closest thing to road rage I’ve seen down this way yet, when two of these meet head-to-head on a narrow lane. There always seems to be quite a lot of dialogue and arm-waving going on before someone concedes and backs their horse up.

I wouldn’t normally advocate a particular place to stay, but the place I found here is so good that I will. Called “Wood Stock”, it’s a home stay down a back lane a way north of the village. Lovely and quiet apart from the usual   surrounding farmyard noises and the inevitable droning of the mosque (how the hell does anyone put up with that, day and night?). The people couldn’t be more friendly and the cabins are beautiful, named after rock legends, I’m in “The Who” with my outdoor shower made from bamboo. 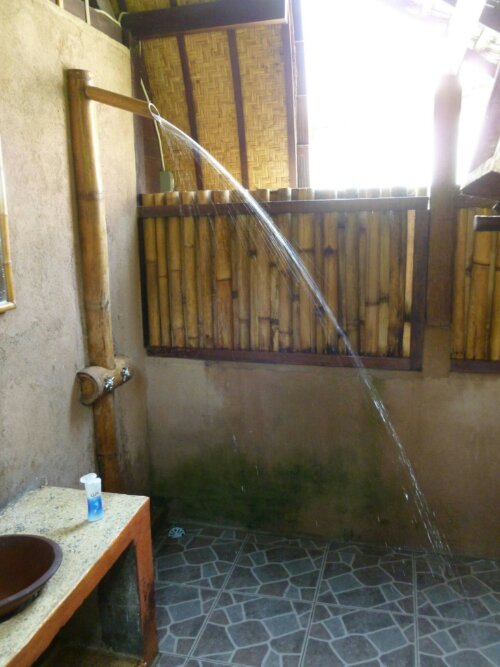 They’re proud of the fact they run the place solely on solar power for hot water and electricity, drinking water is available via home made reverse osmosis, and they have the best coffee with the excellent included breakfast, which is brought to your patio whenever you choose to awaken.

The wet season weather here has so far been well behaved, with sunny days and the rain coming very heavily after dark. Last night I was treated to a spectacular sight whilst sitting in a cabana on a beach having dinner. The rain was absolutely lashing down around me, with a huge electrical storm going on. There was no moonlight, and Lombok, just across the water from the beach, was in total darkness apart from a few lights in Sengiggi down on the coast. But the flashes of sheet lightening behind it would silhouette the mountainous peaks just for an instant in the pouring rain, just like something from a horror film really. I’ve never quite seen anything like that before.

Later I got chatting to one of the guys playing in a band in another bar. They were playing excellent covers of Johnny Cash and Dire Straits and that kind of thing. As with almost everyone here, his English was excellent and I was asking him when and where did they get interested in Western music and whether it was just for tourists or not. He said he grew up in Sumatra and from a young age they were taught this kind of stuff in music lessons in school, starting off with “Baa Baa Black Sheep” and that kind of thing and moving onto cover music as they got older.

Having just said the weather was fine, since about 1pm today it’s been lashing down to one heavy degree or another and has finally stopped as I write this at 11pm. Even though it’s a sand island, it’s so heavy that many of the streets are ankle deep in water that you have to wade through to move around, it grinds on you after a while.

If the weather holds in the morning I plan to take my British Airways gold card backpack to Gili Meno, the smallest of the three islands, to spend one night there before heading back to Bali to sort out some sort of flight to Borneo 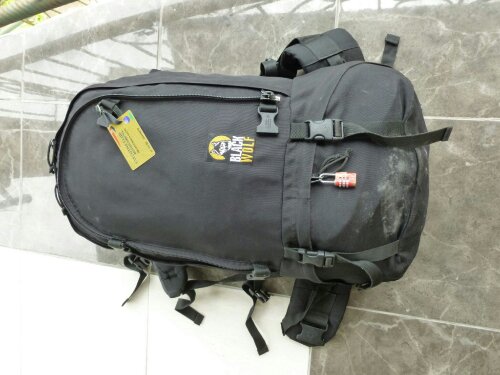 One thought on “Gili Trawangan”