It feels like it’s been a while – the infrastructure here is very temperamental, power failures typically occur a few times each day, and the internet connections are up and down like yo-yos. Anyway, from a rather pleasant lunchtime garden halfway between Old Bagan and Nyuang U I’m having a go at writing as I eat fruit, for the second time today (which is some achievement, as anyone who knows me well enough will know) So, on arrival to Yangon I arrived at my guesthouse to find I actually did have a reservation, which astounded me. A class establishment with a room with a door and bed and everything. No windows or bathroom or anything of course, but who needs such luxuries? In fairness, having no window was probably an advantage as it’s a hell of big old noisy city. The view from the hall was this, of the Sule Paya. 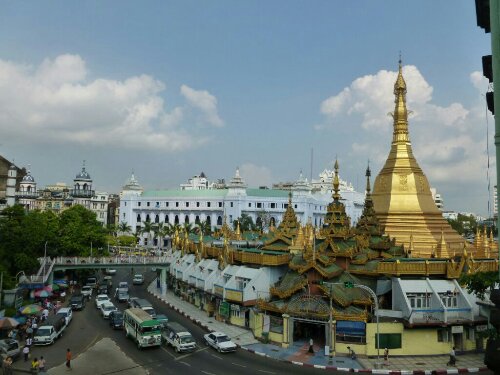 You used to have to change money on the black market only, by changing pristine US dollar bills (no folds, pen marks or other defects, or they won’t be accepted) with a man on the street or a taxi driver or someone. These days though, there are a handful of official money changers, including at the airport, and in Yangon, a very recent addition, within the last few weeks, are a couple of ATMs which will take Mastercard and Visa. Here’s what $100 looks like when changed into kyat, tastefully contrasting my bed sheet: 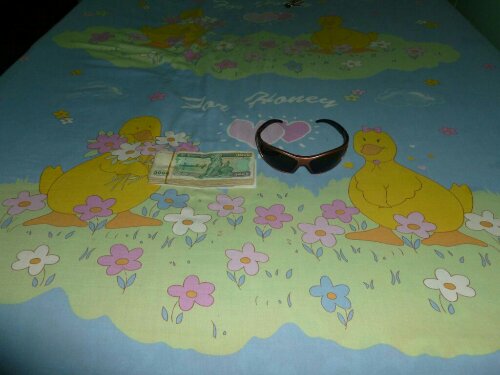 That evening I hiked up to the Shwedagon Paya, and enormous temple frequented by hundreds of locals coming to pray. 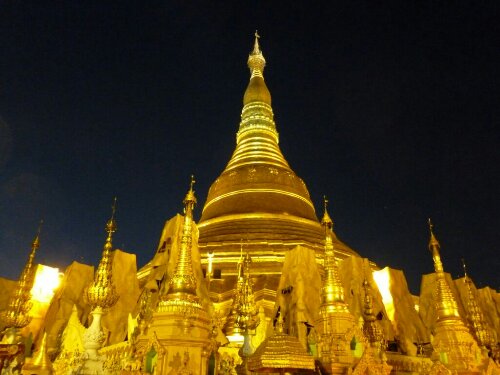 On the way back, I crossed over the railway track, it has a really crumbling infrastructure and people play chicken with the train 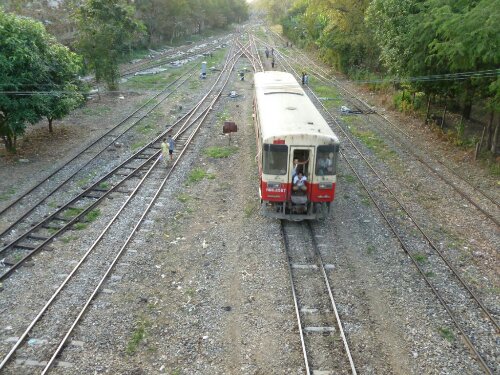 I made a bolt for it to Mt Kyaiktiyo the next morning, an event in itself. The owner of the guesthouse recommended to get a local bus to the bus station, which is probably about 20 Km away, a snip at 200 kyat when a taxi would cost about 8000. When I eventually correctly interpreted the Myanmar digit symbols that represent 43 for the route I wanted, I was given VIP treatment by entering the bus through a special door and getting to sit with the driver. The traffic drives on the right, but almost all vehicles are right-hand drive. 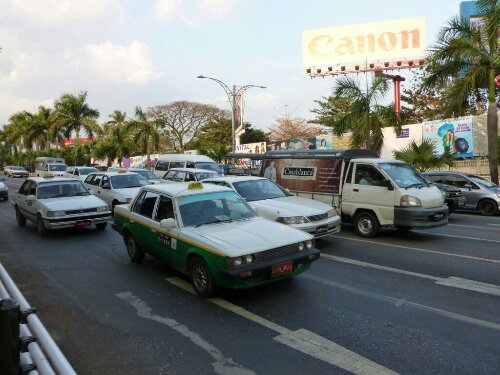 The bus dropped me near, but not at, the bus station, for some inexplicable reason. Slightly perplexed, I chartered a tramp that I found lying on the street, to lead me the 20 minute walk to the bus station for the price of a coffee. Bless his heart, he took me to entirely the wrong part of this massive bus station, which is more like a village really, with people there fixing buses, hundreds of shops and cafes, taxis and people everywhere all over the dusty streets. Anyway I eventually found a bus that would take me, although not all the way as it turned out, they loaded me onto the back of a motorbike to cover the last 20Km or so.

Kinpun, the base camp as such of the mountain, is not at all what I expected, I thought it would be a little traveller’s outpost, but in fact it was quite a busy village, and very dirty and noisy, with terrible restaurants. You ride on top of a small truck to ascend the mountain with about 50 other people, a pretty frightening trip up and down steep and twisty turns. They’d be fairly screwed here if they ever got snow and ice, that’s for sure. At the top of the mountain is a whole village and community as well, again unexpected, and you hike for a while to reach the actual Golden Rock, a pagoda perched on this precariously balanced rock which has been painted gold to represent the head of Buddha. After a certain amount of misinformation, I was led to believe that the golden rock itself was closed and covered up for refurbishment, much to the bemusement of myself and this crazy Polish guy I was with. It appeared to be here 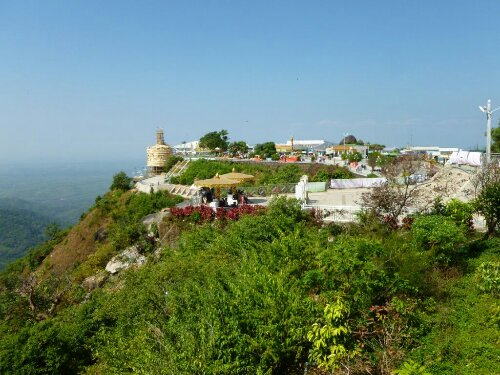 But I later found out this was a different spot, the real McCoy was around the corner, so to speak, so I never saw it in the flesh in the end. The clue was that you could actually see it from the town and my guesthouse. Always these things are obvious with hindsight…

Part 1 of Burma complete, I am finding that trying to write more and more is playing havoc with the piece-of-string internet connection.

One thought on “Myanmar Catch-Up”