I spent a fairly miserable day in Manila, it has to be said. Having stayed at my favourite hotel there which was fine, I had to checkout at noon and find a way to spend my time until 10pm when the bus would leave. After the usual farting around with breakfast at about 1pm followed by some coffees, I hit the mall as you do apparently, when in Manila. This place was HUGE. The entrances are guarded with gun bearing guards and you have to pass through airport style security to get in, which keeps the beggars and viagra sellers out, but there’s not much respite within. The “respectable” stall holders and shopworkers are in your face every few seconds as you walk around, and within the mall there is a huge department store, Robertsons, which would be something along the lines of John Lewis for any UK based people that know it, even in there as I browsed for a belt, the assistants are pre-reading your every move and trying to sell you a fridge freezer as you pass a tablecloth display that you may have looked at in a glancing fashion, before showing you every possible operating function of the buckle of the belt that you may have been foolish enough to touch. That, and a virtual fist-fight with the entire staff of a bar as I had the audacity to try and buy a 34 peso beer with a 500 peso note, it’s enough to try anyone’s patience…..

Anyway, I got the bus which left at 9pm rather than 10pm as my ticket said (good job I got to the terminal early!) and have made it to Banaue. It’s a pleasantly cool mountain retreat, here is the view from my room as I type, with the sound of river rapids raging below me. You can see a few of the famous rice terraces the region is famous for. 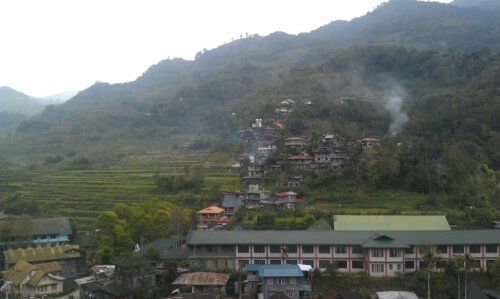 I am amused by the space saving location of sinks. Open the window when you want to do the washing up, and make sure you don’t drop a plate as it’s about a 100 foot drop… 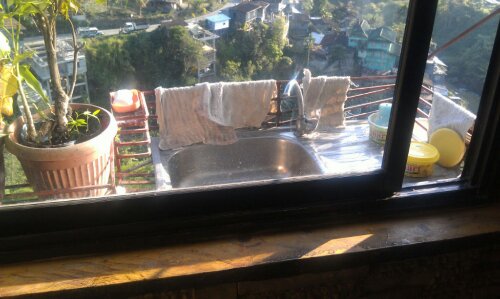 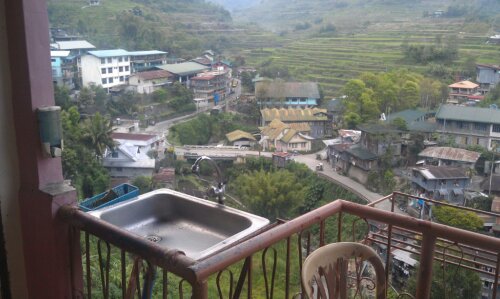 Some chickens await their fete as a motor unit from a ceiling fan spins a rag around over their former friends above them, to keep the flies off 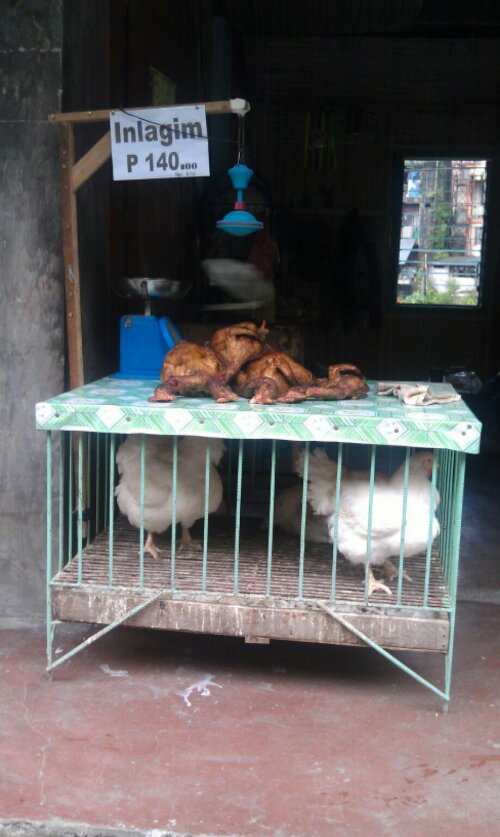 Today I’ve been struggling to try and fit a square peg into a round hole in terms of timetabling my last few days in the Philippines, it really is very difficult to make last minute plans here in terms of transportation in particular. From here, one would normally do some form of trekking around the big rice terraces at Batad or thereabouts, but in my case I’m keen to check out Sagada, a backpacker mountain retreat, only about 60Km from here or something, but involves 2 jeepneys and about 4 hours to get to. From there, the hope is that I can get a day bus to Baguio a little further south, and from there another day bus which should dump you on the motorway near the other airport outside Manila that I need to get me to China. Phew! Hoping for the best.

Now I’m off to meet a few locals I met earlier who are watching some Filippino boxing legend mash all of the opposition.

One thought on “Banaue”