Sagada gets the big thumbs-up! A cool, mountain retreat full of log cabins and leafy mountain outlooks, cool restaurants and bars, nice clean streets and not  man with a gun in sight! This is the entrance to my hotel, I was dying for a pee but I was denied, I had to wait until I got into the room instead. Maybe this is why the streets are cleaner? 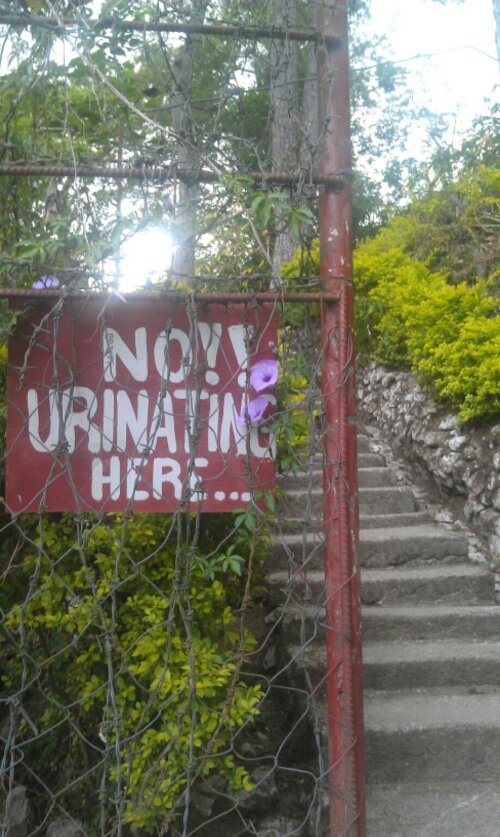 The journey here from Banaue was an adventure in itself, I rode on the top of this jeepney, next to the guy that’s on it now 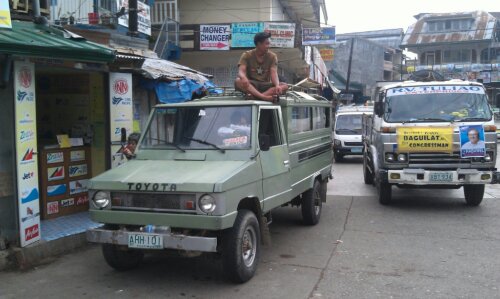 Most times you have to change jeepneys, two-thirds into the journey at Bontoc, a small commercial town. This one went directly there though, and whilst you’re free to attempt to hang on to the roof on the dangerous mountain roads, just before Bontoc they stop and make you come inside, as if you were caught buy the police riding on the top as you slowly crawl around the streets in town, the driver might get a ticket. As soon as you leave Bontoc and the road is sufficiently dangerous again, they stop and let you climb back up…. I lost count of how many partially cleared landslides across the road we passed over.

[Video removed for now – too slow to upload]

Sorry for the shaky camera work, it’s pretty hard to hold on with one hand and hold the phone with the other. This shot was also taken from the roof, a vista over yet more rice terraces 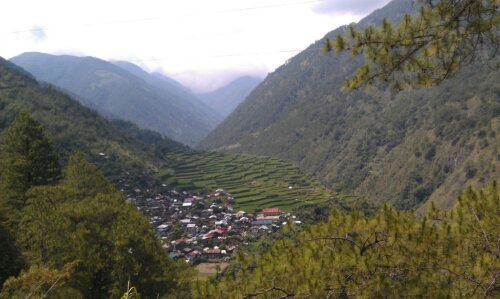 I got a beautiful log room in a hotel up on the hill above the village, they even named one of the rooms after me 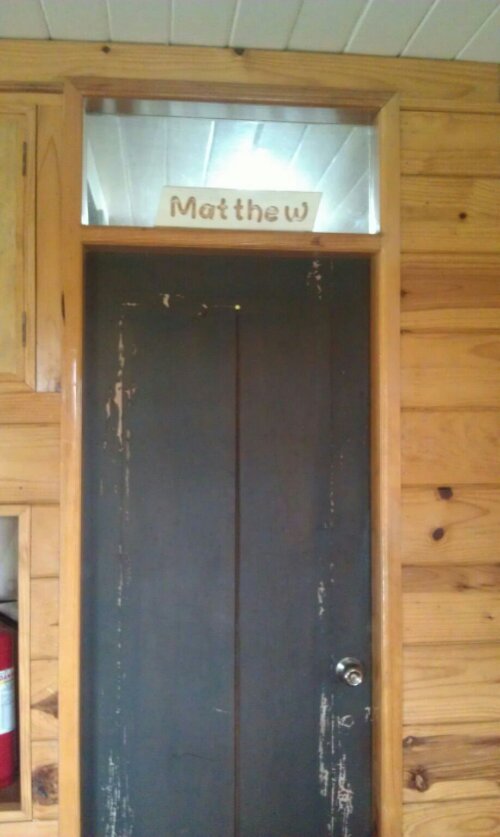 But that one was crap, so I’m staying in Simon Peter across the hall 🙂 This was the rather fine view from bed this morning 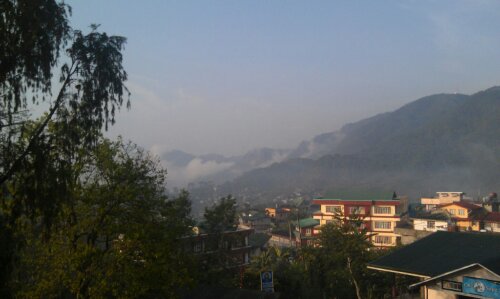 Yesterday I hooked up with a Japanese girl also in my hotel and shared a guide to take us through the “cave connection”, a fairly hardcore potholing expedition, by all accounts. On the way you stop by Echo Valley where there are a load of coffins, hanging high in the rocks, a custom still carried out occasionally, the most recent been placed there in 2010 I think he said. The valley also echoes from the view point, seemingly off the trees the other side, strangely. Our guide said he couldn’t demonstrate it himself as his voice had just finished breaking, i.e. dropping in tone from his childhood squeak to a more manly tone. We asked him how old he was, he replied 24. Seemingly they develop quite late here…

Off we got to the caves, and our guide stops to light up the kerosine lantern that’s going to get us through, and changes the pair of sandals he had on to a pair of flip-flops, which are apparently “far more suitable for caving”. As soon as you’re in to Lumiang Cave, the mouth is full of dozens more hanging coffins, again all as high up as possible within the large cave mouth. They’re made of pine tree logs, hewn out and then a lid placed on, and they’re wedged in position very precariously with stones and stuff. I asked if they ever if they ever fall down, he said in 1990 there was an earthquake which knocked almost all of them down, an%d they all burst open of course. Apparently the villagers put them back up again, but they’re not 100% sure they got all the right bones back into the right coffins……

As soon as you’re in, the tight turns and squeezes begin, I’ve no photos of any of this as my camera is wrecked and I couldn’t risk taking the phone down. At several points you’re going up or down slippery vertical faces with the help of a thin rope, or on not quite vertical faces with no rope and just a few loose footholds which you’re making on slippery rock in flip-flops. The guide, meanwhile, is dancing up and down these faces with one hand, the other hand steadying the superhot gas lamp balanced on his head. In wet season you have to swim through some sections, but we weren’t treated to that.

Eventually you end up at Sumaging cave, a large system full of various formations, including a particularly impressive curtain. There’s a swimming hole at the bottom of this which I just had to try – the water was bloody freezing! I did my heroic deed for the day on the way back up to the exit from this cave. Shima decided to go for a full on uncontrolled slide down a 45 degree rock face. As she came flying past me I reached out and grabbed her and managed to stop her, without sliding down myself somehow. God knows how.

Overnighting in Banguio now, a fairly large city, but arrived late and so saw nothing apart from crowds of people, and running around attempting to find where I need to be tomorrow to get a bus to get me to Clerk airport. Goodbye Philippines, destination China tomorrow!