From mountain to the ocean, the Pacific coast to be precise. A relatively painless drive down via a pretty good quality dirt road brought us eventually to Puntarenas, from where you catch a car ferry over to Paquera on the peninsula de Nicoya. It was 39C when we got to the quay, the first real taste of heat on the trip! Having an hour to kill before the ferry sailed, we got a bite to eat at a restaurant at the pier, mainly to keep an eye on the car parked there in the queue. You wouldn’t normally expect too much of a place like that but the grilled fish was to die for, one of the best meals had so far. The ferry was good, complete with DJ spinning 70s dance numbers, then we drove across to Montezuma village, foolishly relying on the GPS to show us the way. It knew some shortcuts, which had us driving through rivers and getting us well and truly airborne. Secretly I have to admit I enjoyed that ☺ It remains to be seen if Europcar agrees when I return it.

We checked ourselves into a cabin in what can only be described as a zoo. This was a full on casa, up in the jungle behind the beach, with two bedrooms, kitchen, bathroom and hall with a private deck of about 40 square metres with a jacuzzi in it,  and no neighbours within sight! There was a whole colony of iguanas living on the tin roof, possibly the stupidist creatures I’ve ever met as they don’t seem to realise they can’t actually get any grip on the pitched roof. As soon as they move, you can hear them slithering down uncontrollably whilst they try and manoeuvre themselves ready to jump onto a  branch. When they can’t make it they end up catapulting themselves over the edge and fly past your head on their way to an undignified landing on the deck.

Sky TV dish on the cabin roof. Can I not get away from there, ever? 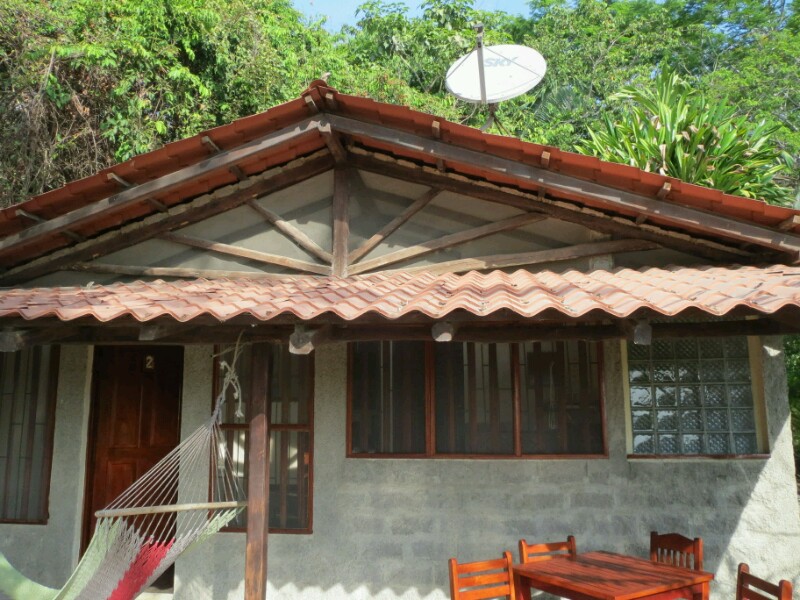 An iguana on the roof, getting ready to make that leap of faith 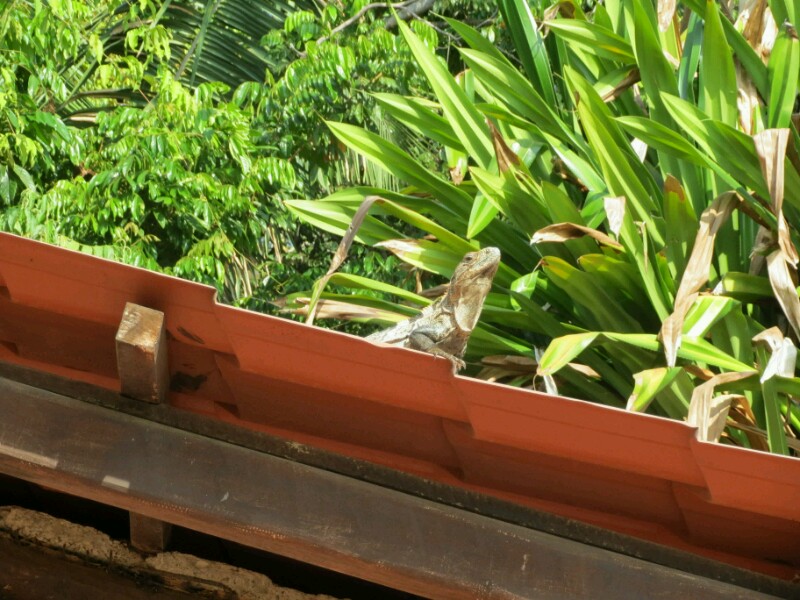 Capuchin up in the trees 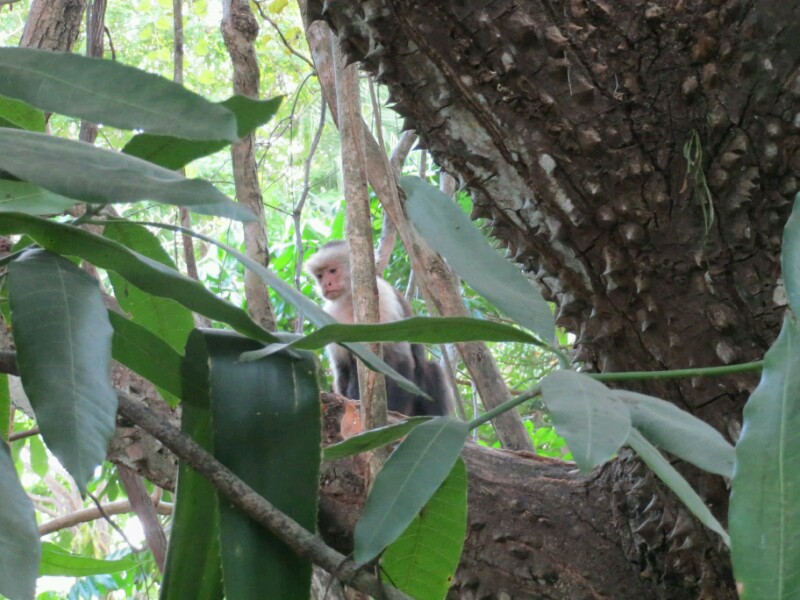 Apart from that there were howler monkeys and white throated capuchins everywhere, bats, white nosed coatis, who were none too camera shy like this fella. 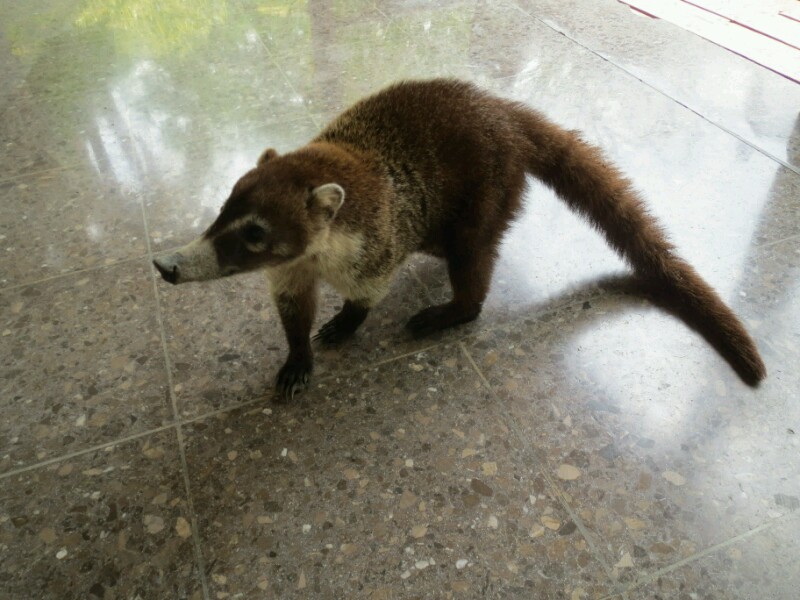 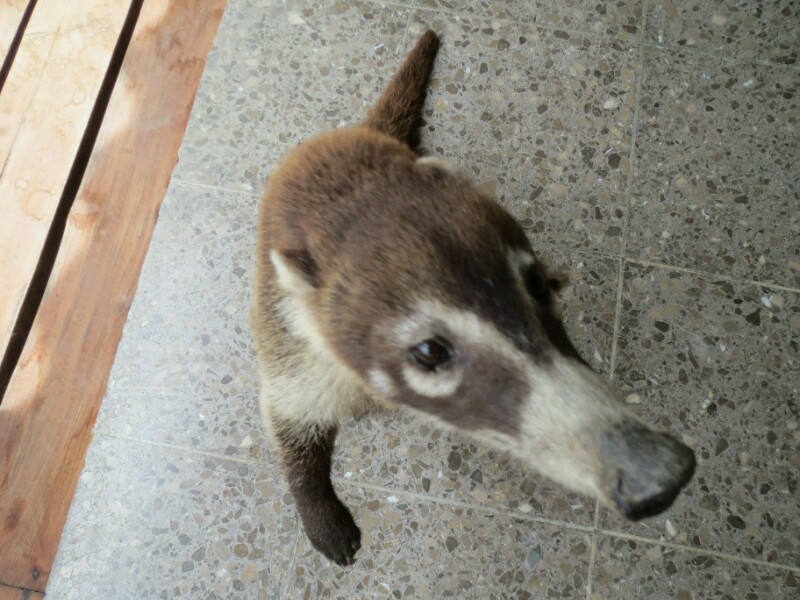 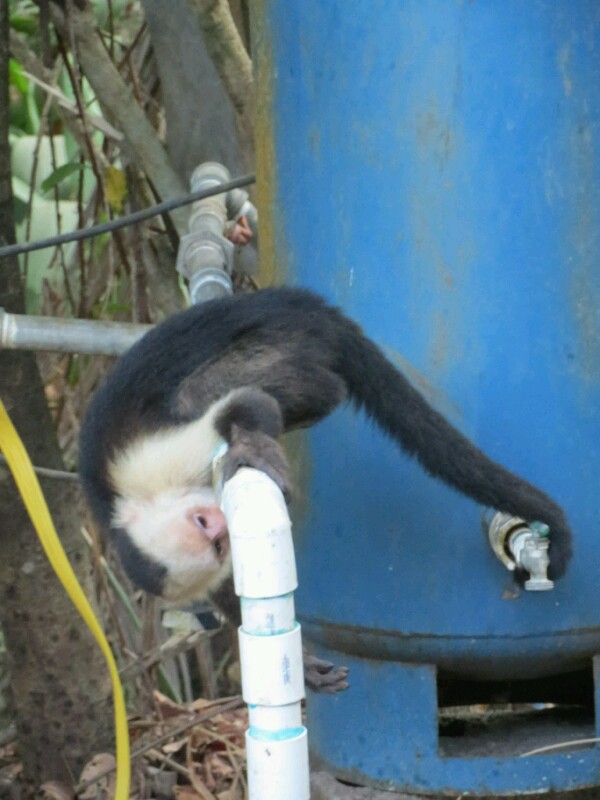 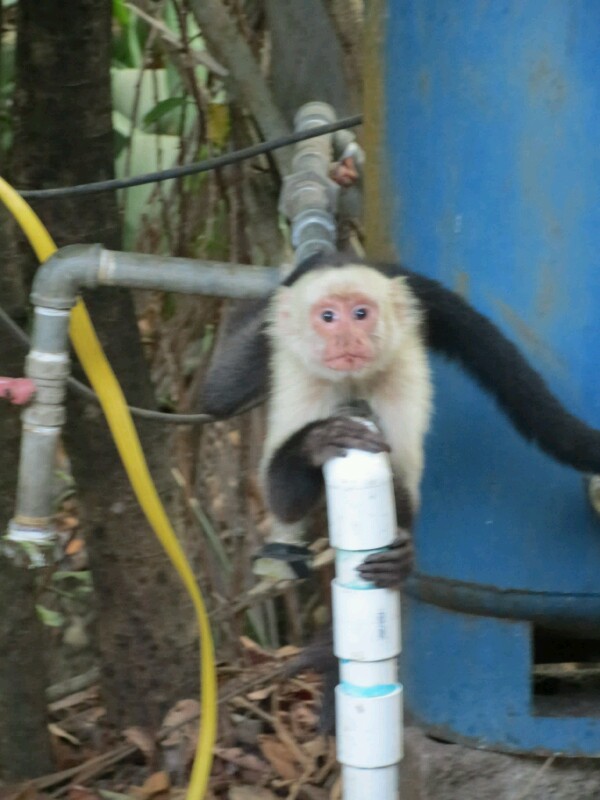 All of this is passing Slothy by. He doesn’t do much, but then hey, he is a sloth 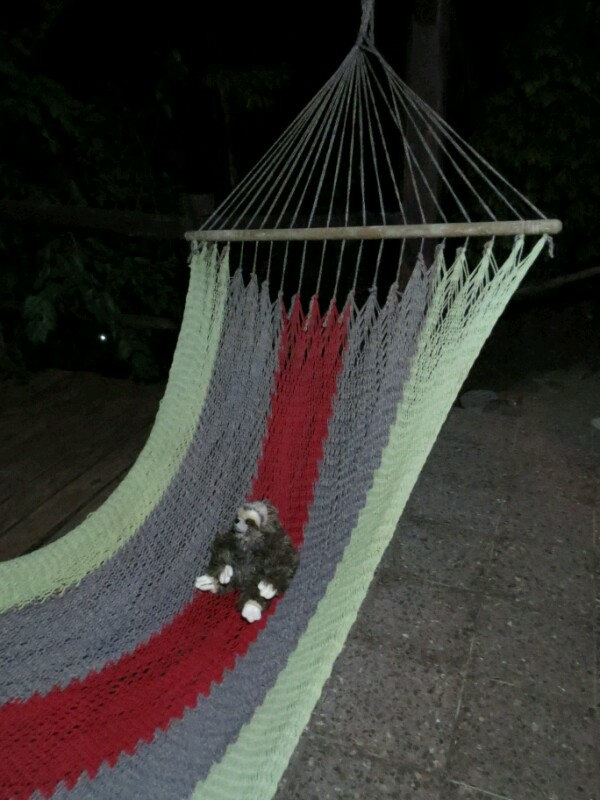 We left it full of water one night, and the evidence was there in the morning of a load of monkeys partying in it. They had been going around the corner to poop, very clean party monkeys 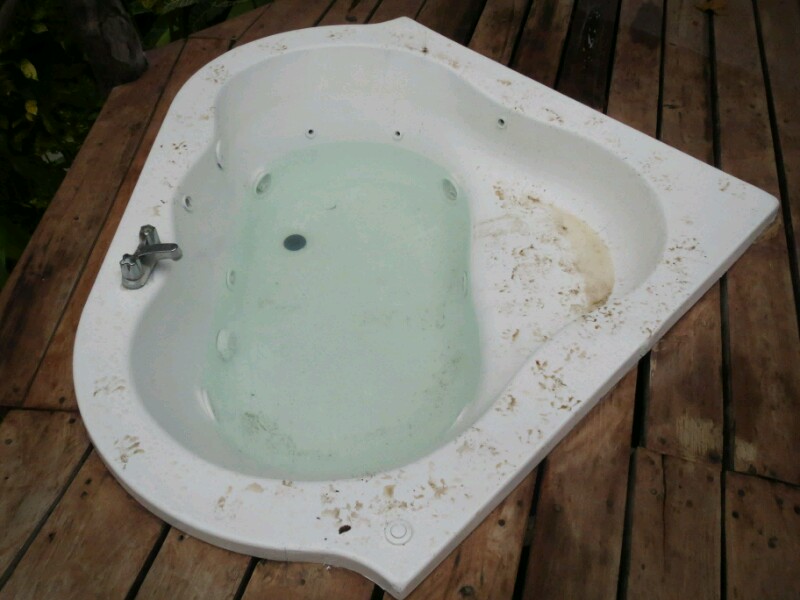 Then there were agoutis running around everywhere, basically like overgrown rats without a tail. White throated magpie jays used to come and have breakfast, which is to say come and have our breakfast. Also there were some vague chicken like things hanging out. More worryingly, Lisa saw a crocodile, thankfully not from the cabin, but a good 20 metres from it!

We hiked 40 minutes or so up the coast to Playa Grande, a big sandy beach popular with surfers and only accessible by that walking route, then checked out the waterfalls, a spectacular series of three tiers, all of which can be jumped off from a variety of heights and risk levels.

Most of the good pics of this are on Lisa’s camera, but with the combination of cables and bits and bobs I have here, I can’t get anything off that one at the moment. A square peg isn’t fitting in the round hole.

The grey dot, upper right,  is me ignoring all the advice and rock climbing the first tier of the falls. 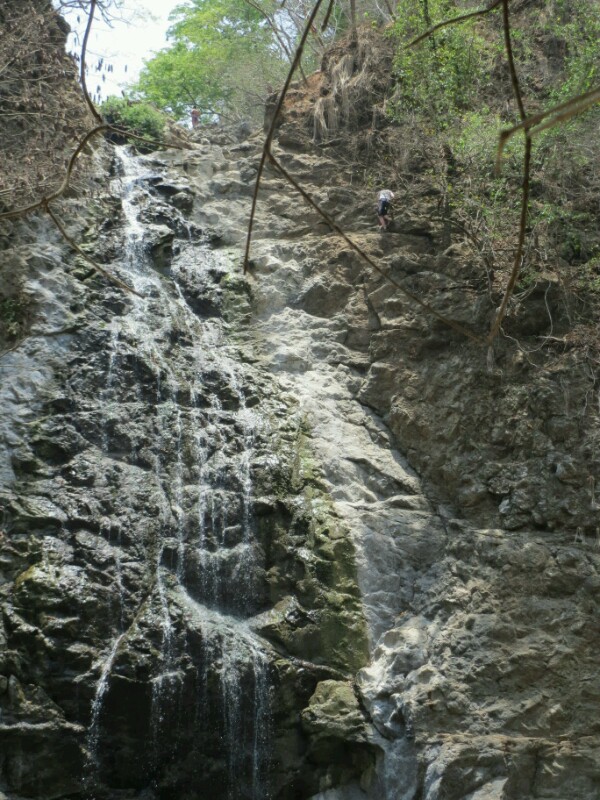 Look closely here and you’ll see two figures, centre right, one is climbing and just above him is one flying down having leapt from near the top. 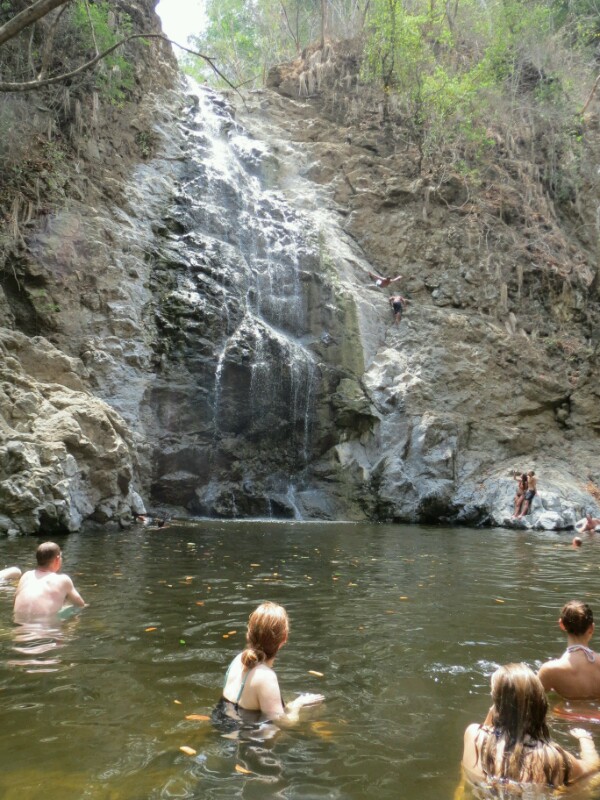 This is looking down the second tier which is the official jumping area. A crazy gringo is mid-leap 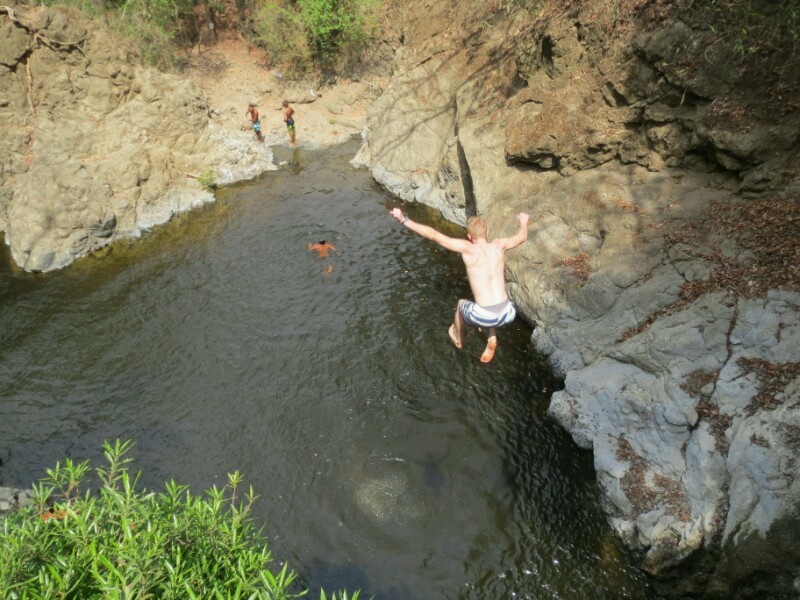 Montezuma was certainly a slice of chilled out beach life, but the time has come for a bit of a drive across the country to the Caribbean coast.

One thought on “Montezuma”